With yesterday's rain, and this morning's fog, continuing above-average temperatures...I figured fishing OUGHT to be pretty good today during lunch!

Unfortuntately, by the time Noon rolled around, the fog lifted and the bright sun came out, plus a moderate wind out of the South.

Not exactly the conditions I was anticipating.  Still, anything is better than sitting at my desk during lunch.  So I headed to a nearby public pond, maybe 5 minutes from our office.  I approached the pond with an eye on one particular corner where I'd seen a pod of grass carp on my previous visit here...but there were no fish visible.  And unlike the other ponds I've visited lately, the algae mats in this pond were still crowding the shorelines and covering the bottom and any aquatic plants that were still rooted to the bottom.  Not a pretty site.  There was abundant activity along the shoreline.  Not fish, but DOZENS of small bullfrogs.  I spotted a couple BIG ones, but they weren't as alarmed by my presence as the small ones.

Because of the wind speed and direction, plus the expanse of algae I'd need to clear to reach open water, I moved around the corner from the shoreline I'd hoped to fish.  No fish visible.  I put on a brownish microjig under a medium-sized football-style strike indicator and began casting my way along the shoreline.  Something aggressive struck at the indicator.  I made a couple more casts, then adjusted my microjig to be closer to the strike indicator and tossed it back out once more.  I thought maybe it was going to be a bluegill or tiny largemouth bass, but...I caught a Green Sunfish!

That was something of a surprise for this pond.  I enjoy catching Green Sunfish, although it generally suggests the pond has a deficient population of largemouth bass.  I guess that shouldn't surprise me, since the numbers of small frogs around the pond pretty much indicates the same thing.  My mind belabors what this (formerly) good pond used to be, and what it has become.  I decided just to enjoy the fishing for now.

I worked my way towards another corner of the pond.  I started getting some good strikes.  While I missed a fair number of good strikes, I landed 5 bluegills: 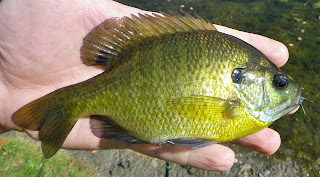 I cast out more towards the middle of shallower end of the pond, and watched my indicator disappear into the jaws of a fish.  I probably SHOULD have been using a topwater fly pattern!  I shortened my leader beneath the indicator once again and cast out a couple more times before the indicator shot underwater, this time because a fish had hit the microjig.  Turned out to be another Green Sunfish, this one even bigger...in the 8.5"-9" range! 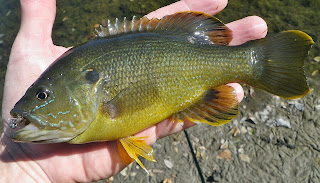 I quickly fished my way back towards my car.  I caught one more bluegill.  I was standing above a concrete culvert/flared end section.  I looked down and saw a frog sitting in it.  I hadn't seen one of these for awhile...the others I'd seen today were bullfrogs.  This one was either a Leopard Frog or Grass Frog.  Without investigating its identity it further, I'll just say that I'm GUESSING it is a Grass Frog. 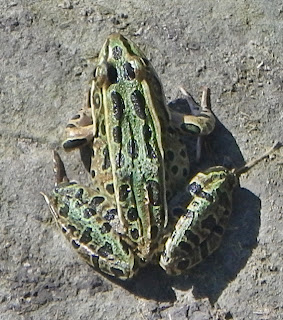