My daughter was busy, but my son was free last night.  My buddy Jay called from the lakeshore and said the words "...Every cast!".
We ate dinner and headed out the door.

As happens often...we missed it.  In the short time before we got to the lake, the wind died and changed directions, and the fish activity screeched almost to a complete halt.  I got to hear the stories of "You should have been here 1/2 hour ago!"

I wanted my son, Carson, to catch plenty of fish, knowing he would have fun doing that.  Instead, he was bored most of the time, but had fun during the exciting moments when he did catch a couple of hard-fighting White Bass. 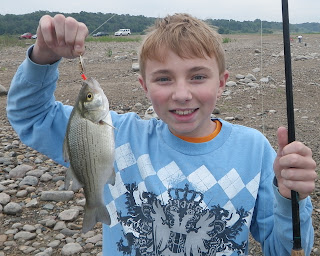 I caught around 10 fish or so, and there were some nice 14"+ White Bass in the bunch. 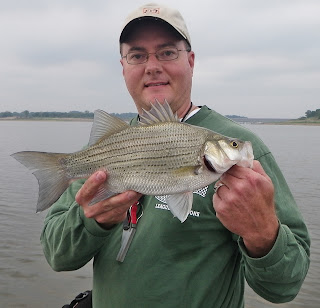 I also tried my fly rod for a bit, and managed 1 small Largemouth Bass on a modified Clouser.﻿
at August 31, 2011 2 comments:

I've been wanting to get my kids in on some good fish-catching action with White Bass at Saylorville this month.


So far, it hadn't happened.  We had tried on a couple of occasions, but never hit the right spot at the right time.

I had an opportunity to take my daughter fishing last night. She's 14. She REALLY didn't want to go. I badgered her relentlessly until she caved. :)

We went. We got to the parking lot, and I spotted my buddy Jay, and two other guys (Dan and Don) already there. Jay and Dan were walking back to the parking lot...without fishing rods! First aid was needed on Jay's finger. No embedded hook, but the tip of his finger and fingernail had been nicely sliced by a gill plate of a thrashing fish.

Jay got quickly wrapped up, and we all got down to the business of fishing. Dan was catching fish nearly every cast. Kennedy and I tried some areas adjacent to where Jay and Dan (and Don) were fishing, but I only managed one fat Smallmouth Bass on a topwater: 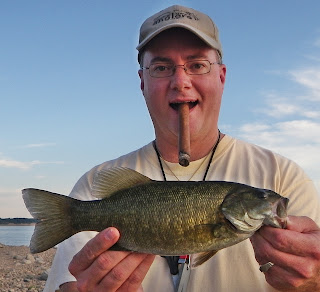 I had Kennedy elbow her way between Dan and Jay (they didn't mind), and she started catching some decent fish!  In fact, for probably 1/2 hour, she was catching more than ANYBODY ELSE! 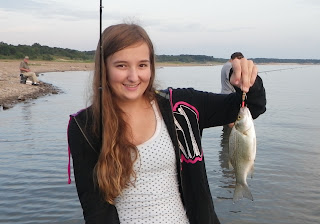 Dan and Jay both helped her removed hooks from fish when she had trouble with it. She's been fishing before.  Usually she did fine unhooking the fish all on her own.

It wasn't super-fast fishing, but we caught some. Kennedy had fun.

When we got back to the parking lot to head home, she THANKED ME for making her go. :)

We got home and she went upstairs to take a shower. She called down, "Uh Dad? You've GOT to come here!" She was in the bathroom (still clothed). She held up her hair (its pretty long, as you can see in the picture), and there was a puked-up shad stuck in her hair! OMG, TOO FUNNY!!

This blog entry is my submission for the Red Tuna Shirt Club and Outdoor Blogger Network Writing Contest.
The topic for this blog is to answer one or more of the following questions:
“What is your dream fishing destination? Who would you fish with? What species would you fish for?”

I like catching bizarre fish, and the bigger the better.  So, I have to say...I have 3 answers to this.

1.  The Amazon River Basin/tributaries.  Why?  Because there are all kinds of COOL, LARGE fish available there.  Anything from Peacock Bass, Red-Tailed Catfish, Arapaima, Pacu, Arawana, Tiger Catfish, ...lets face it, you never know what you might hook next!  It would be fun to chase some of these fish with fly-fishing gear.  Who would I like to fish with?   Jeremy Wade from River Monsters!

2.  Thailand.  Why?  Because they have taken many of the prized freshwater sports fish species from around the world, and stocked them into their waters...both lakes and streams.  Arapaima, giant Mekong catfish, an extensive variety of carp, snakeheads.

3.  Miami, Florida.  Why?  Seriously, its a fly-anglers DREAM!  They may not have trout...but the list of freshwater species is nearly endless, topped off with many "exotic" species including Peacock Bass, Snakeheads, Oscars, etc.  But that's not all.  There's all the saltwater species as well, such as Bonefish, Redfish, Snook, Tarpon, Spotted Seatrout, and so many more.  What's NOT to love??  I would fish with Cordell Baum, "Bonefish Whisperer".  I have fished with him in the past, fly-fishing for Peacock Bass, Oscars, and other exotics around the Miami area.  I'd hire him again in an instant, and his expertise regarding Bonefish would be invaluable towards catching a large specimen of that species. 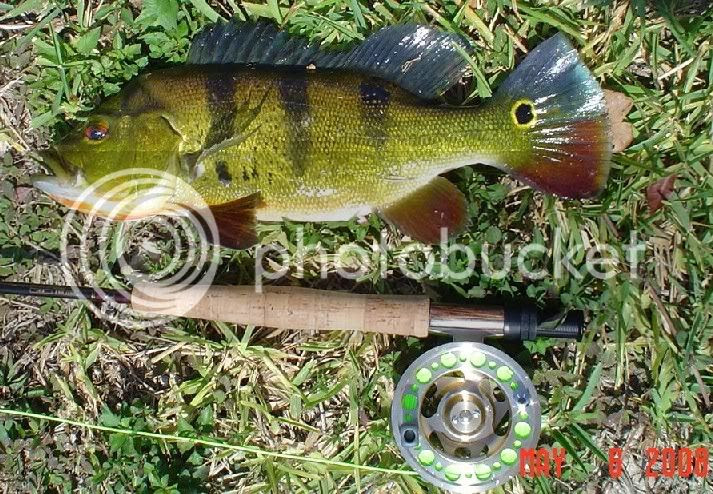 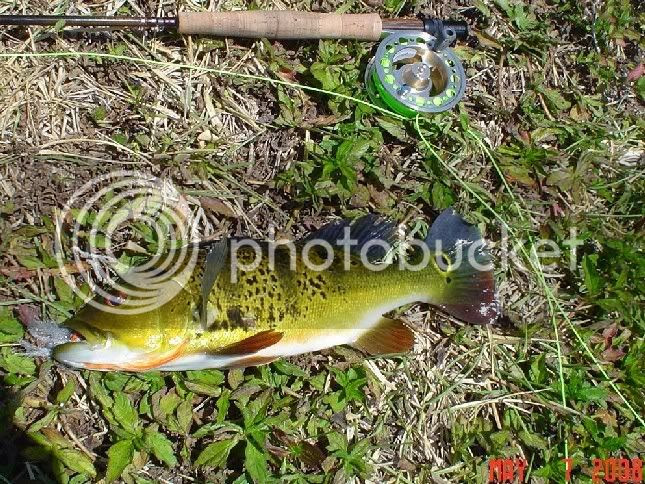 So...those would be my choices.  Where would you want to go....and why?

I decided I really want to post these outdoors, non-fishing picture macros too, to enter into the Outdoor Bloggers Network prompt.

I saw this first on John Montana's blog "Carp on the Fly" (http://carponthefly.blogspot.com/), and thought I would join in.  I admire his ability to narrow his choices down to just two!
Outdoor Blogger Network (www.outdoorbloggernetwork.com) posted a prompt to encourage their supporters to post "Up Close & Personal" nature shots on their blogs, such as photos shot in Macro mode.

Well, not all of these are shot in macro mode, but they are "Up Close & Personal". :o)  My previous blog post contains some backyard bug pictures, and another recent one contains some flower pictures, so I'll try not to duplicate those here....but chances are good many of these pics are located in my blogs SOMEWHERE.  I decided to stick with FISH close-ups for this post.