This is my photo submission for the GreenFish and Outdoor Blogger Network Photo Contest.

The subject of this "photo prompt" is to illustrate my view on sustainable fishing. I have 4 categories I'd like to address, each in a separate entry.


The fourth category illustrating sustainable fishing is GETTING KIDS INVOLVED WITH FISHING.

Kids are the future stewards of our natural resources.  If kids don't learn to appreciate and enjoy fishing (and the outdoors in general), they will have little desire to protect and care for these resources as adults.

We all need to get kids involved with the Outdoors as much as possible.

I have been involved with "Take A Kid Fishing", and have taken kids fishing that had not fished in several years, if ever.

I have been involved in "Learn-a-Palooza", where our Central Iowa Anglers fishing club has been invited to give "casting instruction" to kids.  This was alwasy the most popular display/activity at the event!

I've been involved with Kids Fishing Day at a local city pond.  Here, again, we set up casting stations, and this was very popular with the kids.

Along with Central Iowa Anglers, I have participated in an annual Big Brothers/Big Sisters fishing event, where our Members take "Big" and "Little" pairs out in our boats on a local lake and let them catch fish for an afternoon.  Most of these kids have never had an opportunity to go out fishing in a boat.  Everybody loves this event!

We've done a similar annual event with the "Lakewood Association", where we take residents of a development centered around a private lake out in our boats for a "fishing tournament".  The kids have a ball, and get more excited each year we do this!

Here's some pictures of some of the casting events: 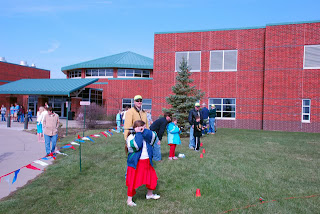 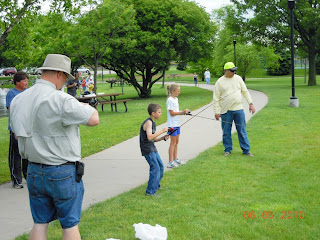 Here's some pictures from the Big Brothers/Big Sisters events...these are the pairs I took out fishing.  We always caught fish! 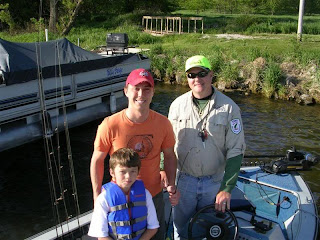 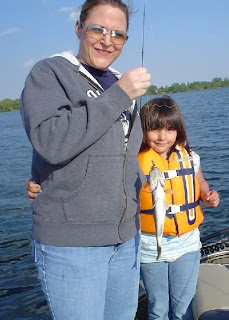 This is my photo submission for the GreenFish and Outdoor Blogger Network Photo Contest
The subject of this "photo prompt" is to illustrate my view on sustainable fishing. I have 4 categories I'd like to address, each in a separate entry.

Picking up trash is important in maintaining a beautiful and clean natural setting.  People won't want to spend time in the outdoors if all the public places are littered with trash!

I have participated in the River Run Garbage Grab along the Des Moines River in Polk County, Iowa.  Each year this event collects and disposes of a HUGE amount of garbage from along the shorelines of the river.

Central Iowa Anglers, which I am a member of, tries to do at least one shoreline cleanup at a local lake or river each year.  We have worked with the U.S. Army Corps of Engineers on their lakes, and have worked in conjuction with the Recycled Fish organization to do shoreline cleanups during some of their events.

The following picture is from one of the Clean-Ups we did for Recycled Fish.  In 4 hours, we picked up 2 pickup truckloads of garbage from the shorelines of a local lake! 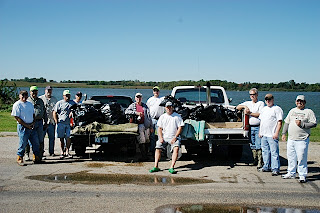 This is my photo submission for the GreenFish and Outdoor Blogger Network Photo Contest.
The subject of this "photo prompt" is to illustrate my view on sustainable fishing.  I have 4 categories I'd like to address, each in a separate entry.
The second category illustrating sustainable fishing is Habitat Improvement.

In central Iowa, many of the public lakes are man-made.  Many were made for flood-control or erosion control (trapping sediments), and not for fishing.  So, most of the lakes have very little in the way of natural cover or structure to attract fish, just flat featureless lake bottoms.

Most species of Iowa gamefish like to associate with some sort of structure.  Structure serves as a substrate for algae to grow, and aquatic nymphs, snails and young fish feed on this.  Those in turn serve as food for larger fish.  Larger fish also use structure not only as an ambush spot and "feeding station", but also for shelter.  So structure is very important to fish.  More structure = more food= more fish.  From a fishing standpoint, knowing the location of suitable structure is often the key to locating and catching fish.

I'm a Member of Central Iowa Anglers (CIA).  I spent 2 years serving as elected President of the organization, and am in my 2nd term serving on its Board of Directors.  One of the goals of CIA is to improve fish habitat in local waters.  We work in close association with the U.S. Army Corps of Engineers (USACE), the Iowa Department of Natural Resources (IDNR), City of West Des Moines, and others.

Over the past several years, we have added fish habitat structure to a number of lakes.  We've constructed and placed "PVC Trees", cedar trees, catfish nesting tubes, trash can reefs, and wood pallet "teepees".  In many cases, fish use of these structures begins within a single day!

Here's some pictures of CIA doing some of our Habitat Improvement projects: 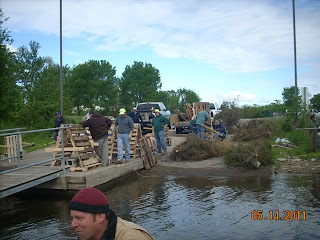 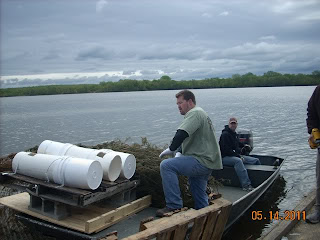 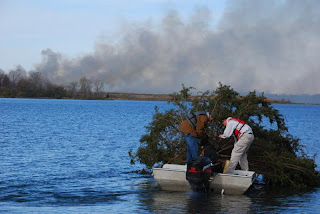 This is my photo submission for the GreenFish and Outdoor Blogger Network Photo Contest.

The subject of this "photo prompt" is to illustrate my view on sustainable fishing.  I actually have 4 separate categories for this, and I will share them all separately.  The other kicker is that each category is difficult to capture with just ONE photo, so I may post more than one per category.

The first category illustrating sustainable fishing is Catch & Release or CPR (Catch-Photo-Release).  This is supremely important!

I've been keeping electronic fishing logs of my fishing "outings" since about mid-2005.  Given the average yearly number of fish caught, I realize I could put a BIG hurt on a number of the smaller bodies of water I frequently fish.  These are public waters.  I can't control how many fish other anglers may or may not keep.  I choose to release over 99% of the fish I catch.  I'm not against folks keeping some fish occasionally.  I generally will keep fish once/year.

At the back of my mind is kids.  Kids need to catch fish when they go fishing.  If I release my fish, nearly all will survive to possibly be hooked by a kid, who will then fall in love with fishing.


Here is the largest fish I've caught so far on a fly rod...a 36.5", 25 lb Grass Carp (White Amur).  I was targeting grass carp when I caught it, and I was very excited to finally catch one.  I got some pictures of it, then released it.  Incidentally, it was also caught on a BARBLESS HOOK.  Given the length and nature of the battle, I'm still amazed I was able to land this fish.
Here are the pictures of the resuscitation and RELEASE. 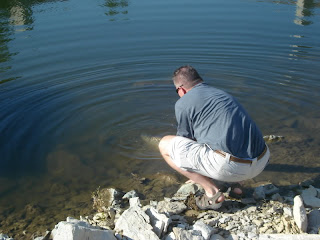 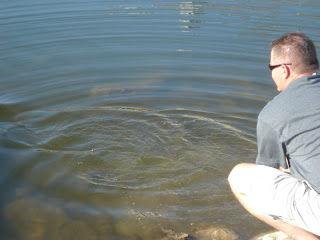 I'm mentioned in a fishing-related article on the Des Moines Register website:

Click the link above. The author, Perry Beeman, called me yesterday and interviewed me. He got the story online FAST! I’m also in the background of 3 of the pictures…I was fly-fishing on the dock that day. I blend in well...I’m wearing a dark blue hooded jacket, and I’m just to the left of the angler's head in picture number 1.
at December 09, 2011 2 comments:

I think its official.  A major warm spell  could turn this around, but at this time of year in central Iowa, you just aren't going to avoid the inevitable for long.

On the way to work this morning, every pond I passed appeared to be 100% ice-covered, and our temperatures in the 10-day forecast appear to be those that will build MORE ice, rather than melt it away.  So...I believe I will call this the END of my open-water fishing for the year, and will now wait for the ice to get thick enough to safely stand on (3"-4"+), so the ice-fishing season can begin.

I will have more to say about my 2011 fishing season in a future blog entry.

For now...I will tie up some fly-fishing patterns that I feel will be useful in my pursuit of next year's fish.

Below are some examples of what I've been tying over the past week or two. 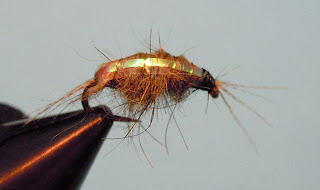 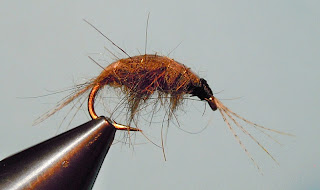 ﻿Deer Hair Popper...I tied this for Smallmouth Bass, but it could see some use for other species as well:

Below is a size 14 Shad Fry I created to imitate that phase of a shad's life when nearly every other fish finds it to be an EASY meal.  Not much as nutrition, but they can't swim very fast at this size, so even fish like Common Carp will hound these pods of tiny fish.  The color of this artificial is nearly identical to the shad fry I've seen.  I always thought to myself, "If only I had something that was tiny enough and looked like these shad fry!"  Now I do:

This next pattern is my first attempt in YEARS at tying a Muddler Minnow.  It isn't perfect...the proportions aren't the best, the head could be a bit larger...but I think it'll catch some fish: 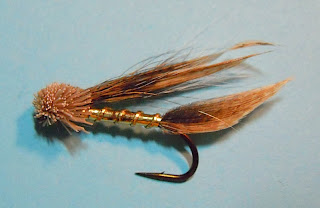 Rick Zieger recently sent me, at my request, some of his Goldie Jr wet flies.  There have been some notable instances this year when a super-flashy patterns caught fish while more subdued offerings were being ignored.
I tried to tie some of them myself.  I tied one with gold Flashabou, one with gold Krystal Flash, and one with some pearl Flashabou that was mixed with the gold Flashabou hank I have.  They turned out well, I thought, and I look forward to trying them out in the coming year: 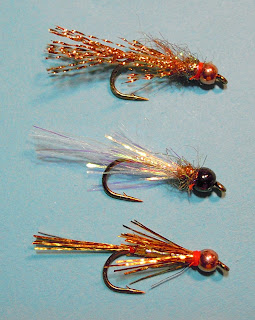 I've always liked the look of the Thunder Creek Minnows.  Here's one I tied with Craft Fur, and coated the head with Clear Cure Goo (a UV-cured epoxy alternative), then added eyes with fingernail polish.

Below is a trio of rather generic Beadhead Nymphs I tied up: 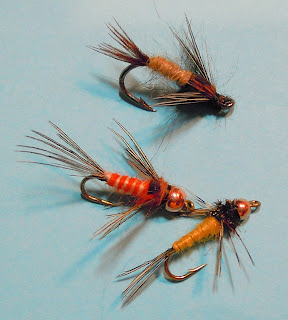 Below is a Morrish Anato-May Peacock I varied slightly by adding a flashback, and used brown goose biots for the tail instead of 3 feather fibers.  Its a great-looking pattern: 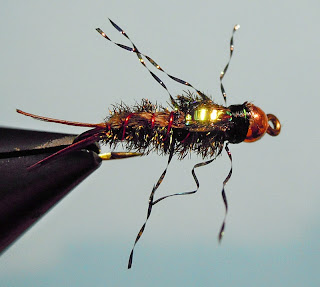 Below is a group of my "Somethings" and variants I've tied up, which trout especially have fallen for: 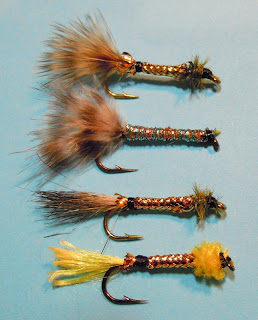 And lastly (for now), here are some "Booby" style patterns in an Electric Chicken color scheme.  My thought was that these might do well on White Bass in the Spring.  White Bass seem to really like this color combination.  With a sinking line or sink-tip fly line and a short leader, I should be able to fish these close to the bottom in the river next Spring, without getting snagged up too much (since the foam "eyes" will keep the pattern from sinking to the bottom). 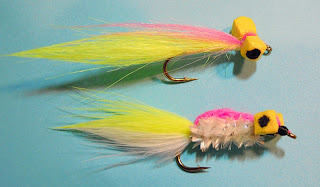