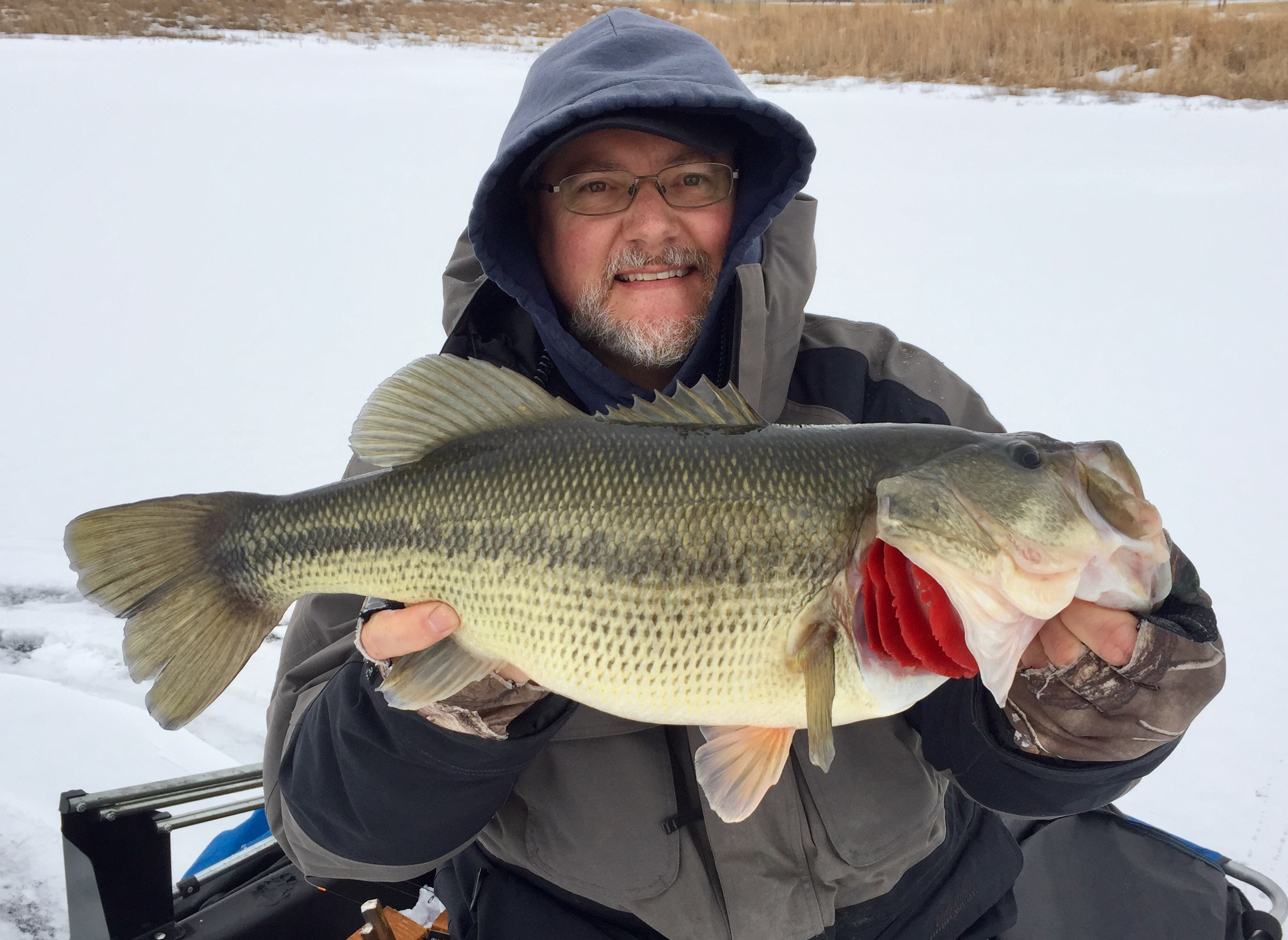 Jay and I formulated flexible icefishing plans for Saturday.  We didn't know where we might find safe & accessible ice, so we had a series of "contingencies".

Fortunately(?) the first place we tried was accessible.  The ice looked "iffy"....lotsa bubbles trapped in the ice, surface cracks....but not really honeycombed.  6.5" of ice.  We fished here most of the day, before hitting another place for the last couple hours.

Fishing alternated between very good, to zero throughout the day for each of us....usually only one of us was having success at any one time.  And then the fish would completely disappear for both of us.  Very bizarre.

Despite not catching much for hours at a time....we had fun and we did catch some decent fish!
We caught some crazy-aggressive chunky Hybrid Sunfish:

Even the Pumpkinseeds seemed more aggressive than the bluegills:

(BTW...the bottom right fish in the picture above is a Pumpkinseed hybrid.)

We didn't catch any crappies, and just a few bass.  This was the biggest of the day at a chunky 20" (see picture at the top of this post.)

I was looking down the hole when that one showed up and hit!

In other news....remember the ice rod that got ripped out of my hands and flew down the back in January?  Well...that pond's water is typically pretty stained all year.  But on Saturday I discovered it was strangely clear....I could see my lure tipped with a waxworm down to 8' +/-.   When we had arrived at the pond, Jay had initially drilled a couple holes to check ice thickness/quality.  Before we left that pond for the day, I decided to try and fish those holes since we couldn't find fish anywhere else.  I picked a hole that was over 6' of water.  I didn't mark any fish.  I dropped my lure/waxie to the bottom....then noticed something off to the side a bit.  Looked like my lost rod laying on the bottom!  I drilled 2 more holes before getting directly over the top of it.  I put on a rattle spoon and dropped it down.  Within a minute or two, I managed to hook THE CORK HANDLE (not the line or rod or eyelet like you would expect)....and reeled it up. I GOT MY LOST ROD BACK!!!  We decided the chances of finding it and retrieving it were astronomical.  CRAZY how everything worked out like that!  The uncharacteristically clear water was definitely the biggest factor.

Anyway....pretty cool stuff!  Oh....and no muskrats this time, but I did look down a hole once to see a ginormous bullhead slowly swimming just a couple feet under the ice.  I would have loved to catch it...I reeled up as quickly as I could, but it never turned or showed any interest and was quickly gone from view.
at February 19, 2018 No comments: Links to this post

It just figures, right?  The past 2 Saturdays have been GREAT weather for icefishing.  The past 2 Sundays....not so much.  But Sundays are when I have time to do it, so we each take what we can get.

I ran to get some bait for my buddy Jay and I, and then scouted some local ponds to see if we could even get on them.  I drove by 2 ponds....looked pretty dangerous.  Third pond....MAYBE we could have gotten on, but would almost certainly have broken through with our first step on the ice.  Pond 4....Looked like there was one spot that we could have gotten on.  As I was walking back to my vehicle, a pickup truck pulled up, and one of the guys jumped out to talk to me.  They were looking for somewhere to fish too.  They had been on a small pond near Polk City earlier in the morning, and had broken through the ice.  The guy had plunged in thigh deep through the ice.  They went home and changed pants/socks/boots and were looking for safer ice.  I told them I thought they could get on in a certain spot at this pond, so they went out on the ice (successfully), and drilled some holes.  I checked some other ponds.
At pond 5, there was thin ice along the edges, but I thought I could see where we could probably step off shore and onto thicker ice.  At pond 6, it looked like it was accessible, and there was already a guy fishing there.  At pond 7, I thought maybe in a few select spots it may have been accessible, but other areas had thin ice around the edges.

I reported back to Jay, went home and suited up/loaded the vehicle and met Jay at the pond we decided to try first.
We got on the ice ok.  Holes were drilled, I measured 6" of ice.

Fishing wasn't super fast, but one side of the pond definitely had more fish activity than the other side.
I had a muskrat come up into my hole....3rd pond this has happened to me in just 3 days of icefishing this season.

Jay lost a big fish they took off on a blistering run, then either broke his line or cut it off on the ice.  He also caught the nicest Pumpkinseed of the day.
I had 2 nice fish that somehow took the Swedish Pimples off my line without even bending out the clip I had them attached to.  I'm puzzled about how that happens.
I did catch some bluegills, a couple pumpkinseeds, and two bass.  One bass measured 15", the second measured 19". 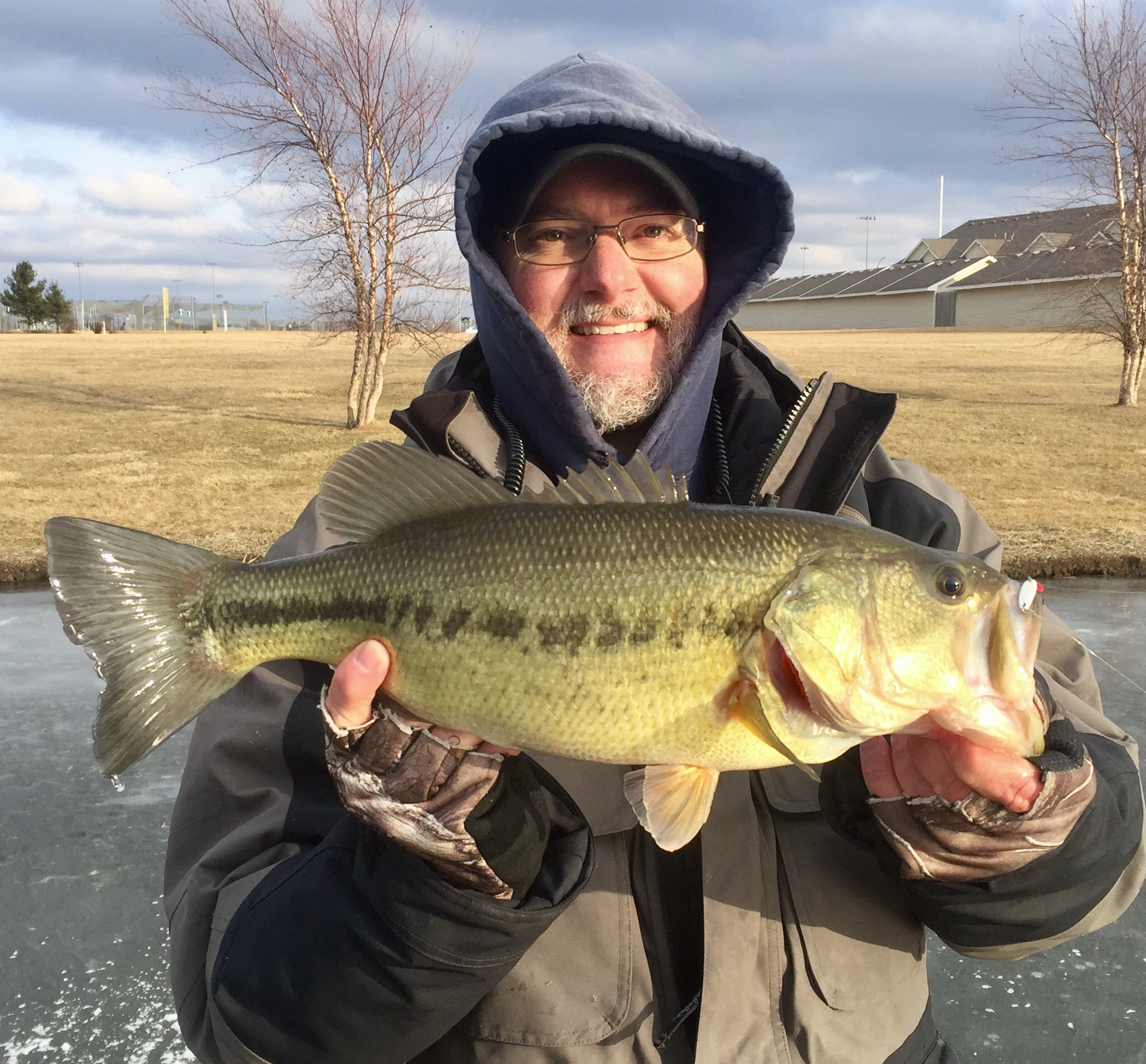 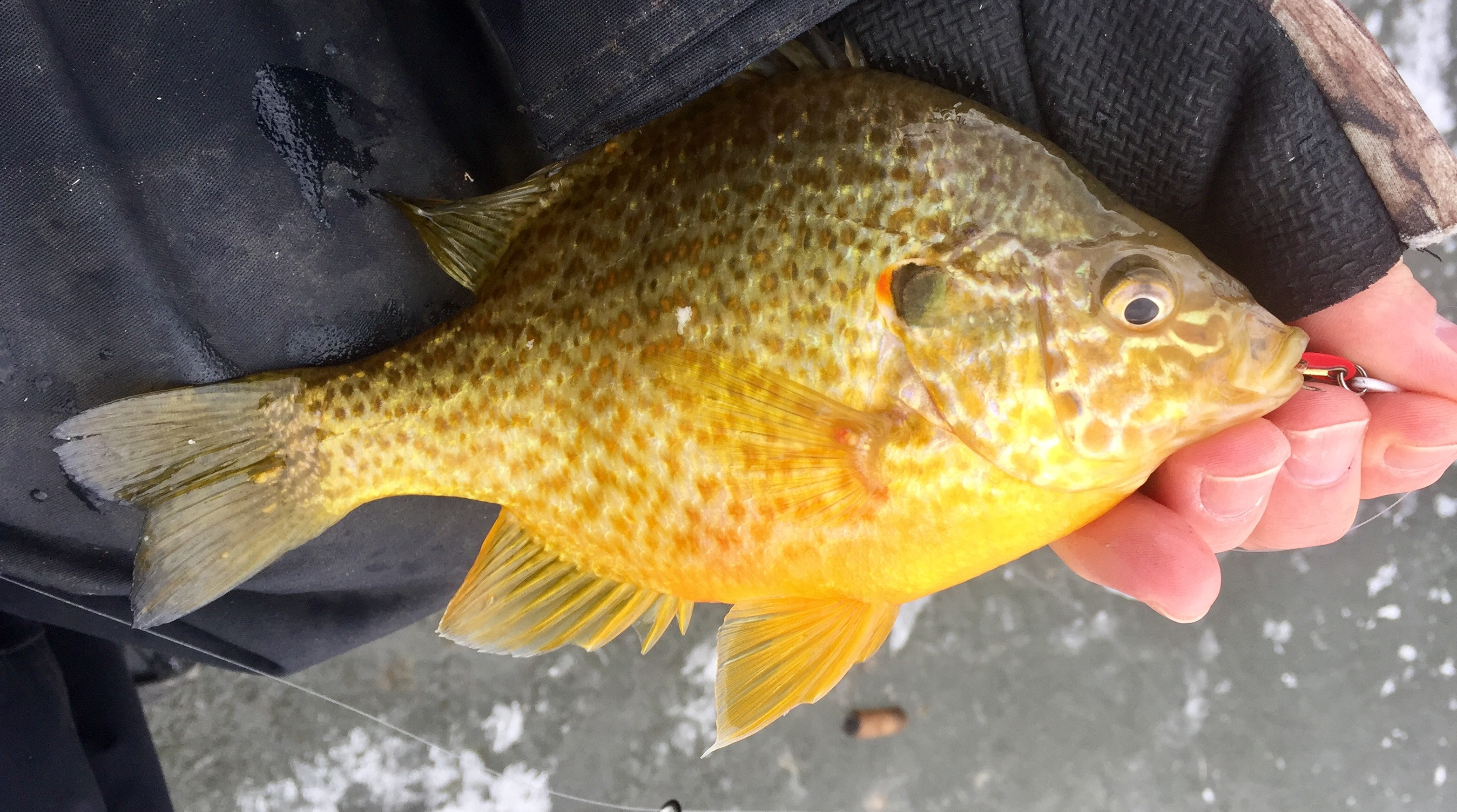 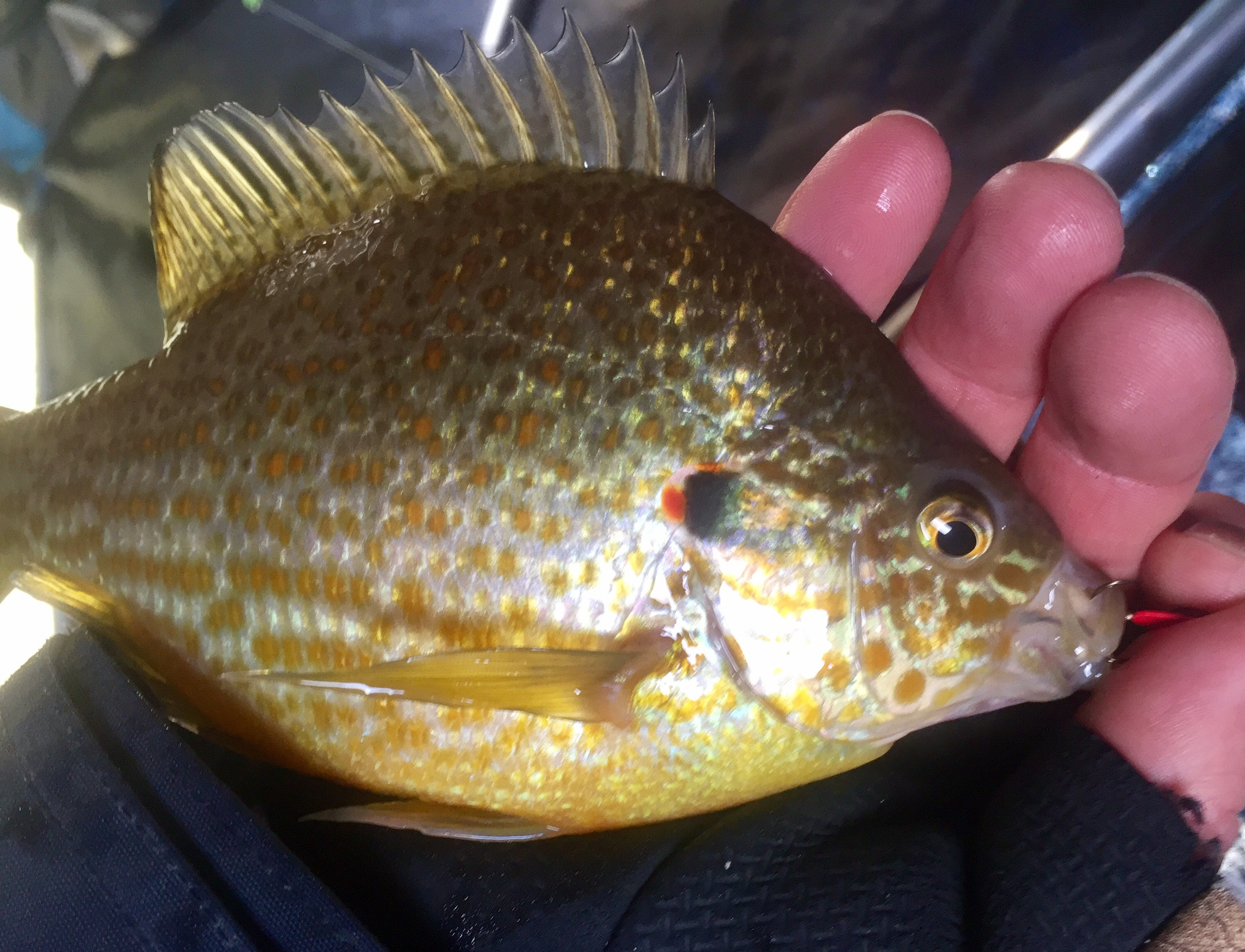 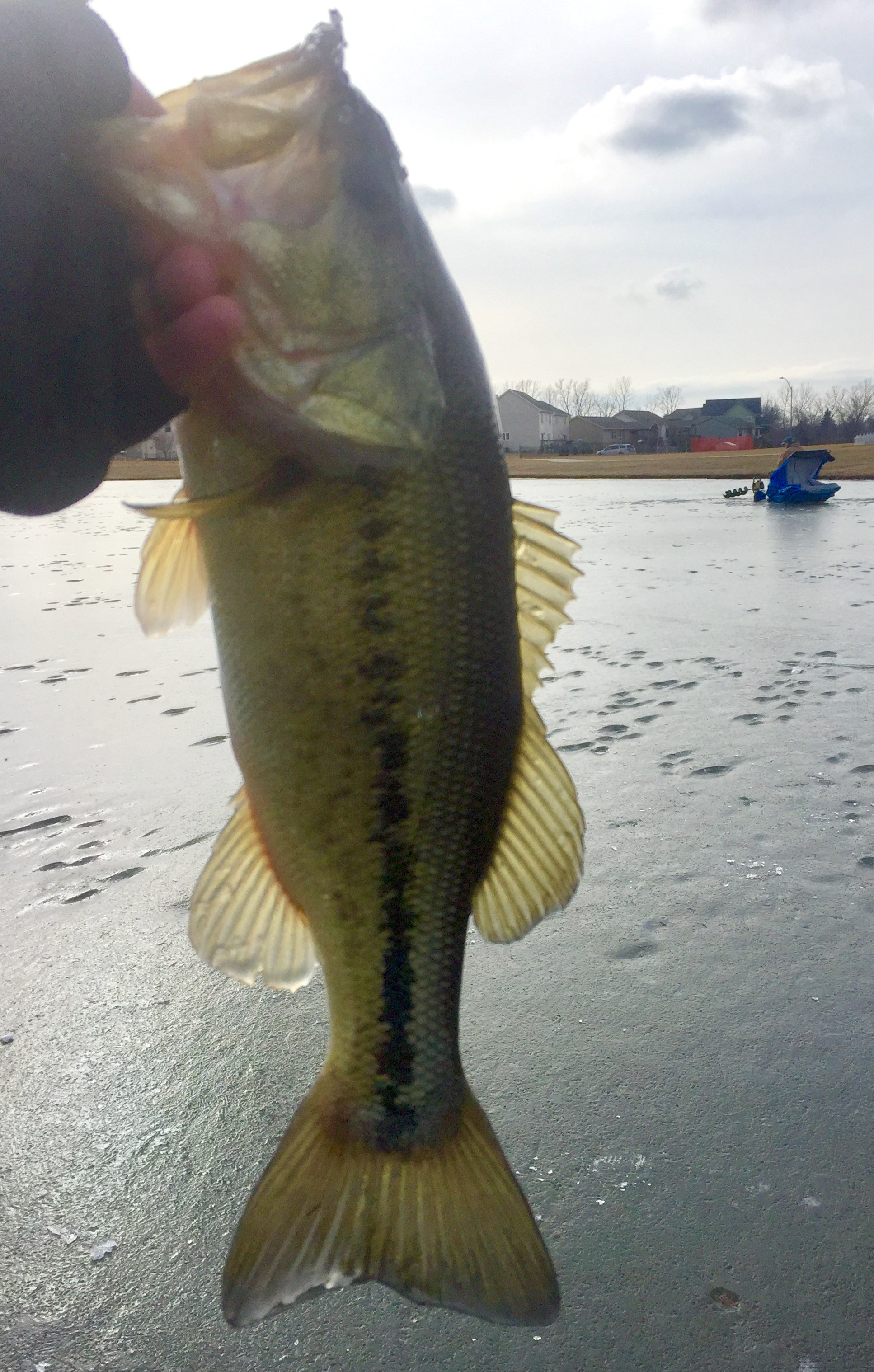