Jay and I went icefishing again on Sunday.

We fished 2 ponds we didn't fish last trip.  But this post isn't really about that.  Its about "the other stuff".

At each of the two ponds, I had muskrats pop up in the hole I was fishing.  At the 2nd pond, it almost looked like the little bugger was gonna start chewing on my transducer cable so I had to shoo him away!

And something else happened that I've never had happen before, and...yes, its rather embarrassing to have to admit it, but it was interesting all the same:
I set the hook on a fish... I could tell it was a nice fish. The rod was about forehead height and I was reaching up with my other hand to start reeling in some line.  The fish was apparently MUCH bigger than I thought and it TOOK OFF!  It ripped the rod from my hand and it harpooned right down the ice hole...didn't even touch the sides, I don't think.  I plunged my hand down the hole to grab the rod but missed.  LOST MY FRIGGIN' FAVORITE ICEFISHING ROD-N-REEL TO A FISH!  All I could do was shake my head and laugh about it.  The fish definitely won that round!

My son even came out and icefished for awhile.  He did well, catching at least a dozen fish.  He had fun, which is the best you can ever hope for. 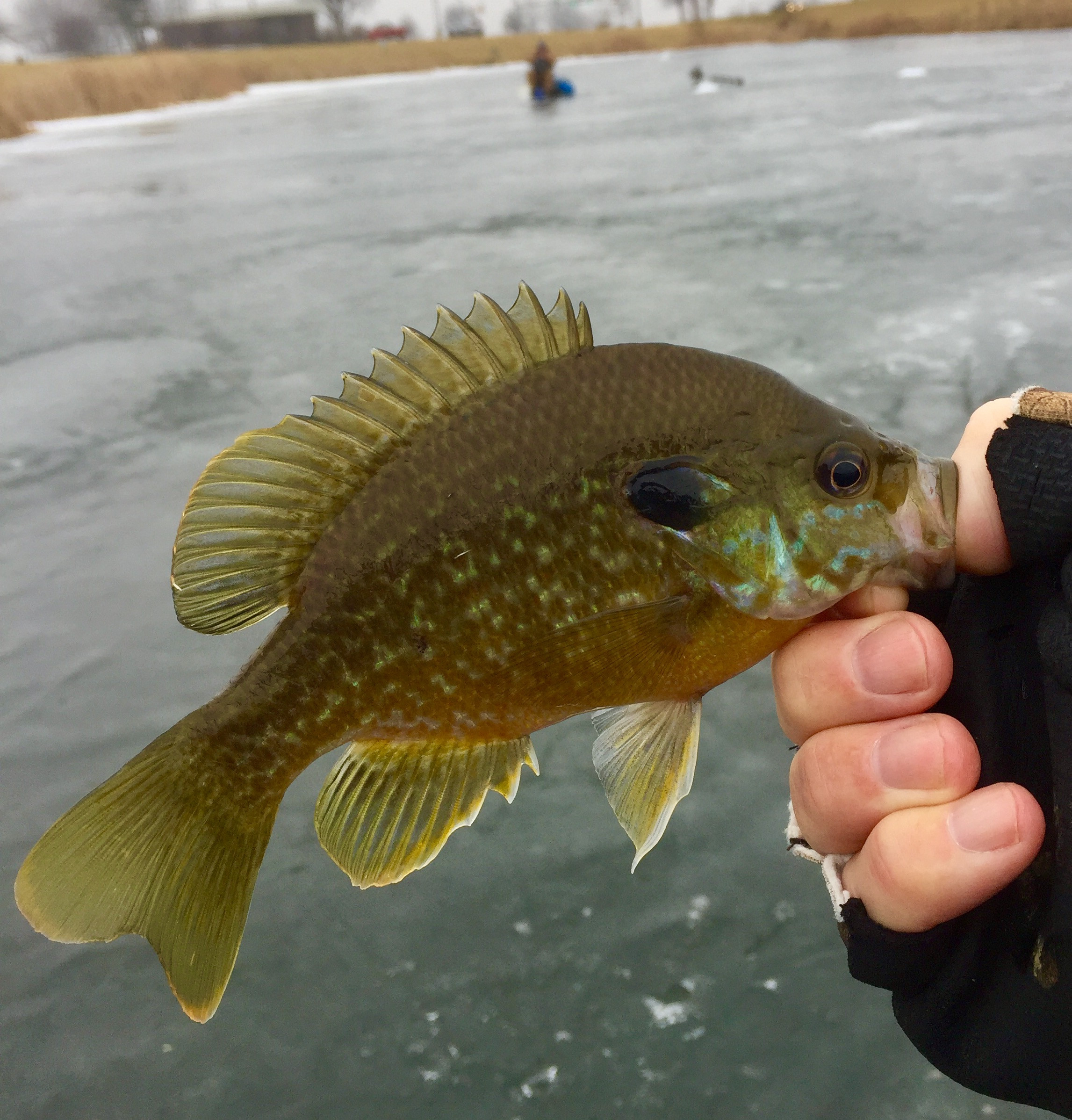 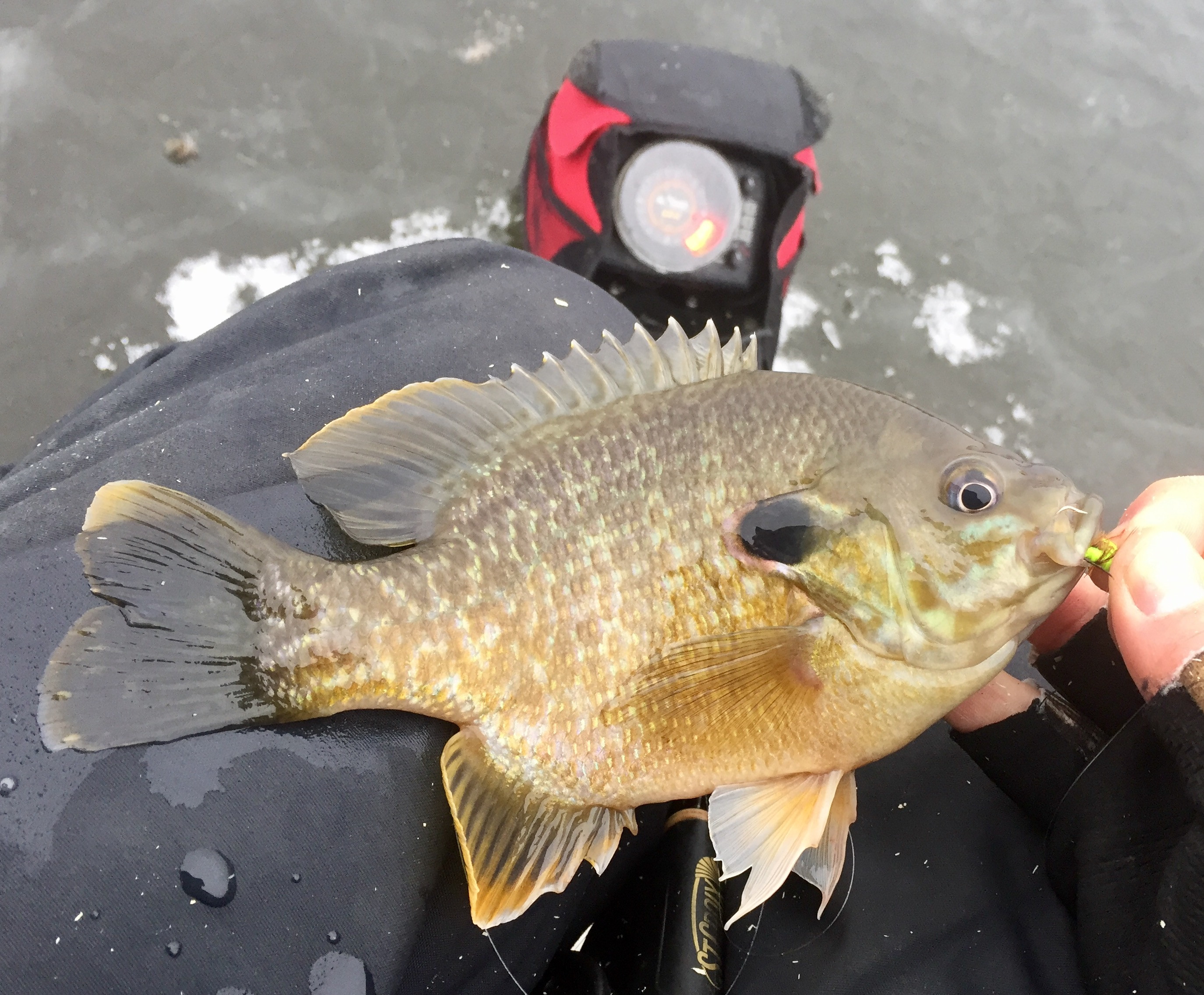 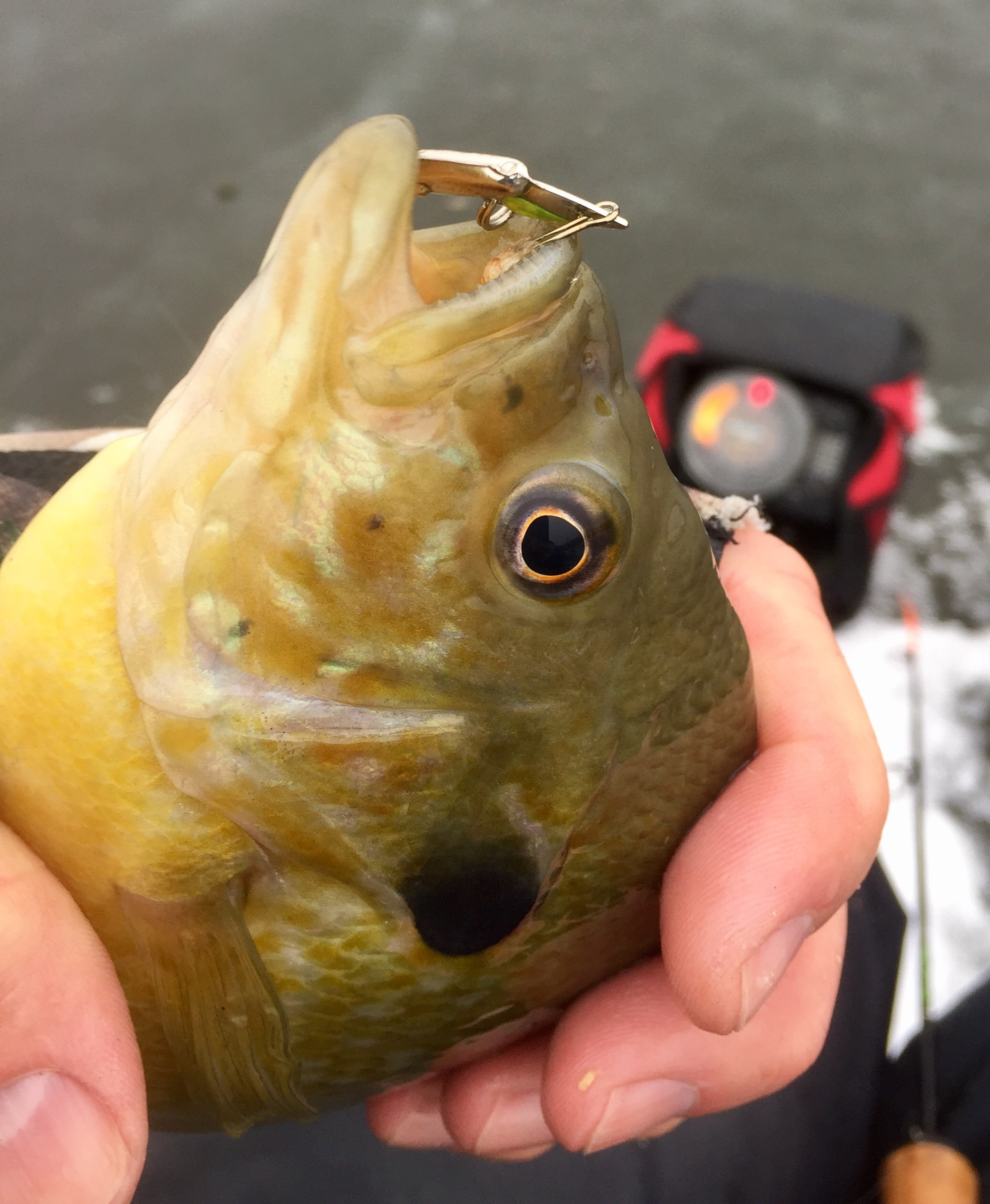 After 2-3 weeks of subzero temperatures, the weather finally warmed up into the low 30's (F) here in central Iowa.
Time to icefish!
My buddy Jay and I visited 4 local public ponds on Sunday, January 7.  We fished from @ 9:15am-5pm.
I measured the ice thickness at 2 of the ponds....one had 8" of good ice, one had 6.5" of good ice.

We caught fish at each pond.
We hoped for crappies at the first pond, but only caught bluegills. We had the pond to ourselves until 3 other anglers showed up.
At the 2nd pond, which we also had all to ourselves, we caught bass and a couple bluegills.  We didn't mark many fish. 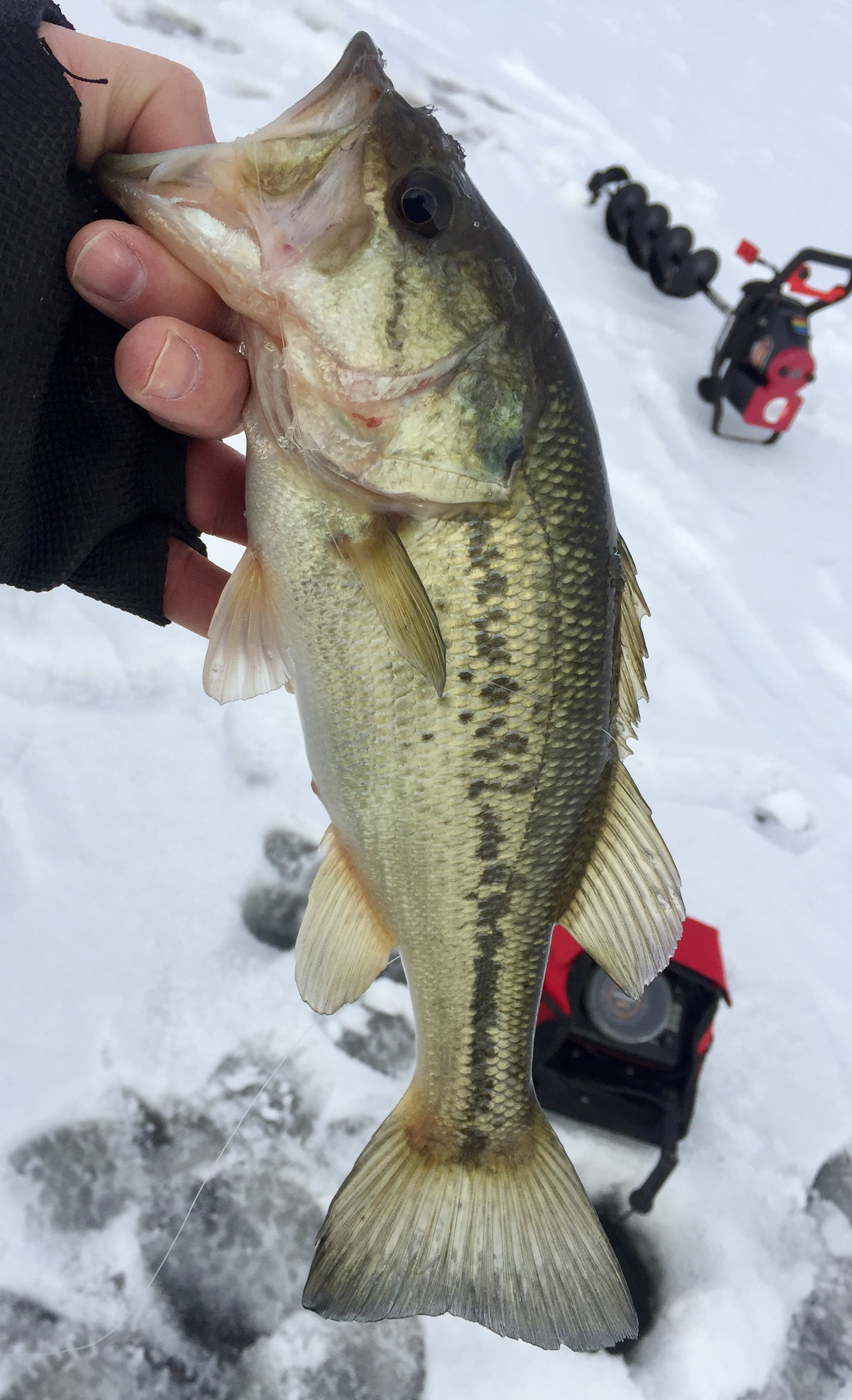 At the 3rd pond, there were 2 shacks already on the ice when we arrived....and by the time we left there were at least 18 people on the pond (including us)!  Fish were the most active in this pond, and we caught bass, bluegills and crappies. 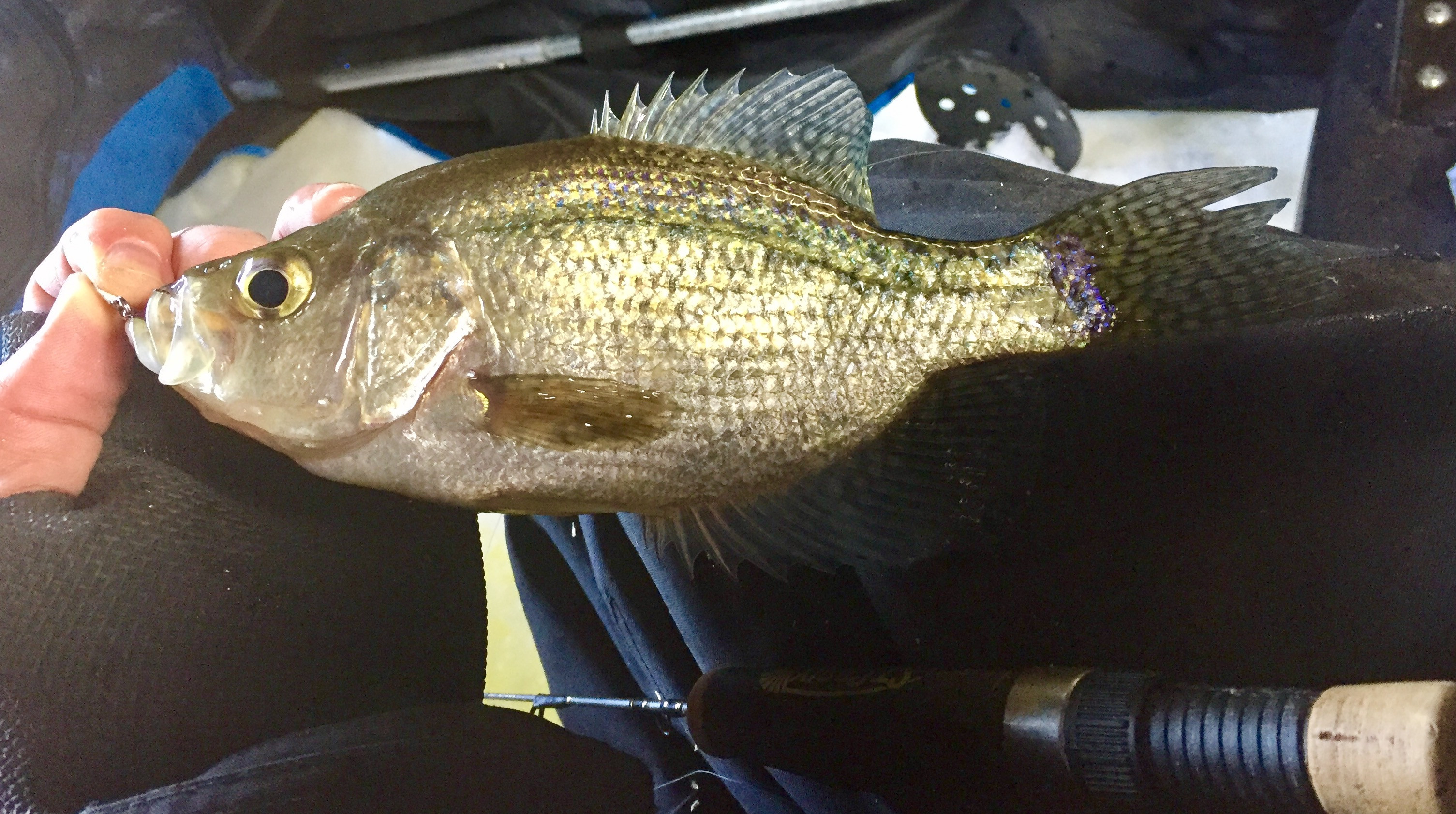 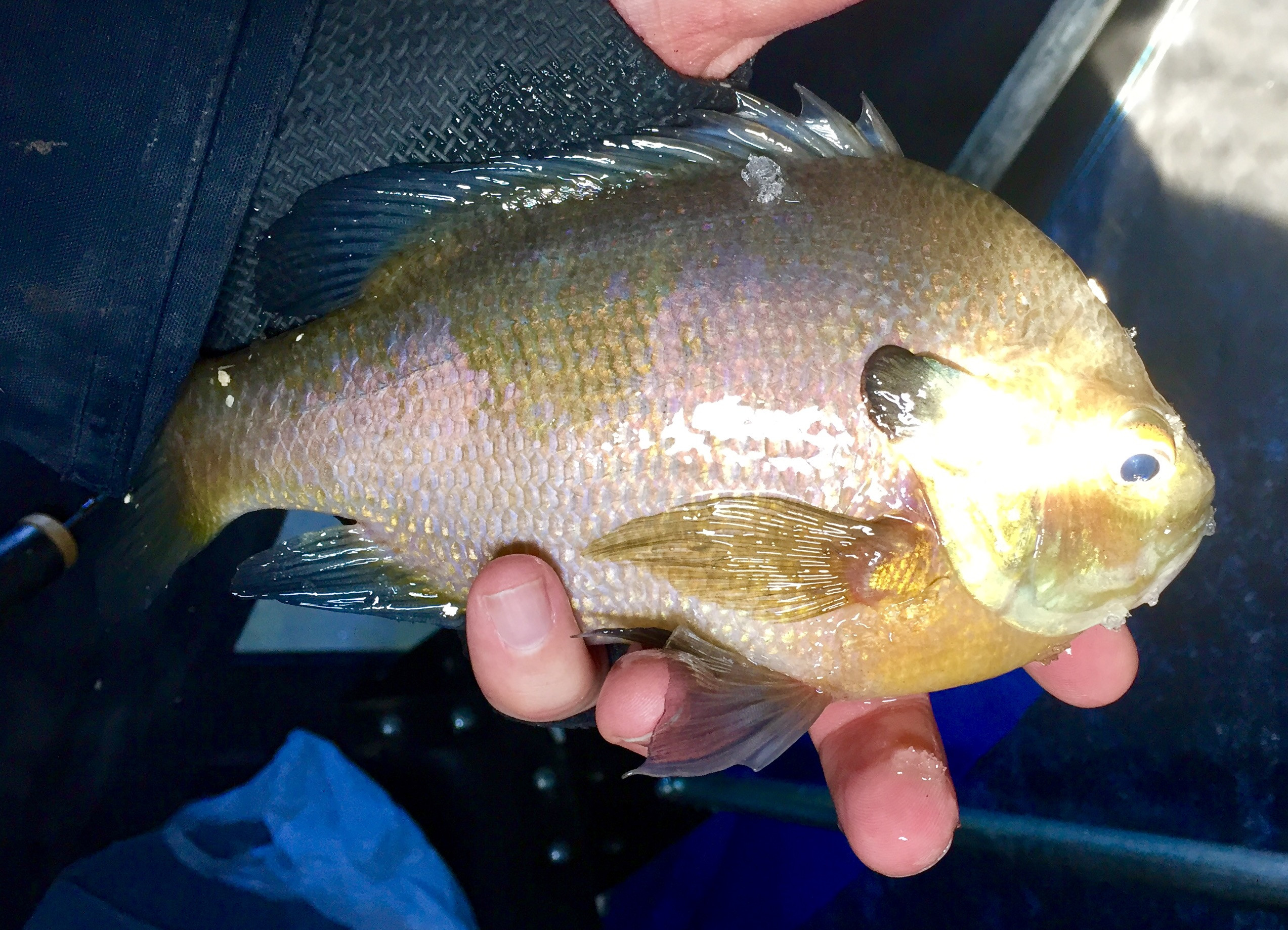 At the 4th pond, we had it to ourselves and marked plenty of fish the entire time.  Apparently they were all tiny....we caught tiny crappies 5" and smaller....and small Green Sunfish as well.  Near the end of our outing, we each caught a couple bluegills that were in the 5"-6" range.   Lots of fish in the pond, they are just really small!

It was good to catch fish again...the last fish I caught were from open water about a month ago!