This was pretty cool for me…
This is me and Dave Abbott, Founder of Angling Masters International (AMI). He’s a well-known fishing personality (guide, author, TV personality) in Canada.
He was in Iowa to help promote the 2010 Des Moines GrandMaster fishing tournament (which continues all summer long), and stopped by our Central Iowa Anglers meeting earlier this month (May), where he gave a wonderful enthusastic presentation on both the tournament, and what he's learned about fishing for and catching BIG fish!

He also presented me with the prize(s) for winning Week 1 of the tournament.
I won it with fish I caught on fly-fishing gear! 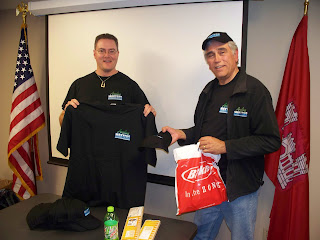 I fly-fished last night at the crappie pond. Where have all the crappies gone?? I admit I fished for bass with a topwater foam popper along most of the areas where there appeared to be crappies working, so I probably COULD have caught more. I did catch 2 bass up to 14" (lost a 3rd one that looked to be maybe 17"), and 5 crappies, and 9 bluegills (tiny!)...
I also caught a 19" channel catfish on a white boa yarn leech:

And...When I made my cast, I really did NOT intend to hook this thing, but he swam into my line. I was hoping he wouldn't get hooked, but he did. Landed my first Muskrat! Actually, he landed himself. Once he felt the hook, all he wanted to do was get out of the water! Here he's still in the water, but once he was on land, I eventually was able to grab the hook with some pliers and pop it out. I never did see blood...the red in the picture is the thread head of the fly. Maybe I should've clipped some fur for dubbing while I was at it??
I probably made him really angry...next time I'm fishing at night, he might sneak up behind me and chew my leg off!

This pattern has me pretty excited.  Its a reasonably easy tie, and results in a beautiful fly!
The biggest challenge is getting the "legs" to be about the right length.  I've tied some too short, but usually they are too long.  They still catch fish though.  Here's some pictures, plus color variations I've come up with.

Yes, they DO catch fish! 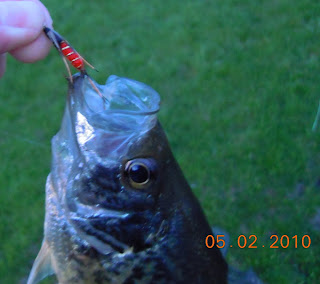 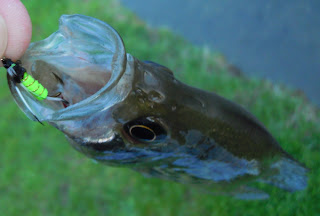 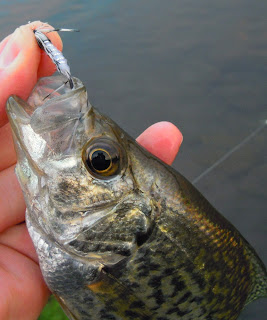