I got my new boat and trailer.  My typical fishing trips are just flyfishing from shore at the local public ponds in the town where I live.  There are over 20 such ponds, which provide some variety and keep my interest going.  A few times a year I like to get my Hobie Outback kayak out on some of the lakes further from home.  Its been a very good fishing machine...very quiet, you can totally sneak up on fish.  There were things about it I wish were better.

When I saw the Blue Sky Boatworks 360 Angler prototypes over a year ago, I got very excited.  The design of this watercraft addressed practically everything on my "wish list" of items that would make fishing from a small craft much more enjoyable and practical.

First, I'd owned regular fishing boats.  They are good fishing tools, plenty of storage and room for taking others along.  I got tired of always worrying about battery charges, lights, motor maintenance, fuel, etc etc.  One reason I got the Hobie Outback kayak was because of the Mirage Drive pedal propulsion system.  No batteries or fuel!  Human powered.  Similarly, the BSB 360 Angler uses a different pedal propulsion system.  And like the Hobie, it can still also be paddled if desired or required.

The seat of the 2008 Hobie was not comfortable for me.  It sat very low, which was good for kayak stability, but not good for sight fishing.  I couldn't stand up from that low position.  And even if I could, the floor of the kayak was not flat and would not have been a good platform for stand-up flyfishing.  Like all kayaks, it was fairly clumsy to get into and out of.  It also wasn't possible to go backwards by pedalling.  If the wind pushed me too close to shore, I would have to get the paddle out to reposition.

Blue Sky Boatworks is a company under the umbrella of Jackson Kayak.  They are very experienced in kayak design and production.  While there are similarities between the BSB boats and kayaks, the first difference is there are two separate hulls instead of one.  Its a catamaran.  There is ample storage space inside each hull.  The hulls are rotomolded polyethylene like most kayaks, and are connected by framework between them.  The deck of the boat sits atop this framework.  There is a nice pedestal chair on the deck that swivels and is adjustable up-and-down and forward and back.  The seatback is adjustable as well, and it has armrests.  Put the seat in the position that suits you and allows you to pedal in comfort.  I LOVE this seat...it is easy to stand up and walk around on the deck of the boat...and even sitting it is a much higher viewpoint than kayak seats can offer.  Great for sightfishing.

The pedals on the Hobie are forward-and-back type...you pump your legs, which directly move the fins beneath the kayak.  You can go in very shallow water and still use these by making short strokes, or go faster in deeper water by making full strokes.  The pedals on the 390 Angler are bicycle-style pedals, which operate a propeller beneath the boat at a 12:1 ratio (12 propellor rotations per single pedal rotation).  You can pedal forward or backward.  Backward is much slower that forward, but I like this feature.  No need to get the paddle out when the wind blows me close to shore.  Both boats have rudders and rudder steering controls, as well as deploy/stow controls.

One thing I didn't like with my Hobie was my anchoring system.  It was simple.  I could have done something better, but never did.  I ended up with an anchor over the side of the kayak, with the anchor rope tied off to the side handrail of the kayak, and the extra rope tucked in under my leg.  It would tangle.  It worked, but wasn't ideal.  For the BSB 360 Angler, I installed the Low Profile Anchor Wizard.  It has a covered line spool with a handle.  You turn the handle one way, and the anchor drops into the water.  You can turn in the opposite way to lock the amount of line out.  Then when you are ready to move, you just turn the handle to wind the anchor back into the boat.  Very nice, easy to use and no extra line laying around the deck of the boat.

I bought the cart wheels that plug into the bottom of the Hobie Outback, and that has been a good way to get the kayak from the car to the water and back.  When in the water, I just stow the wheels in the storage well behind the seat of the kayak.  In order to plug in/unplug the wheels when in the water, you pretty much have to be in the water at least knee deep next to the kayak.  The BSB 360 Angler also has wheels, one on each side of the kayak.  They are on legs that rest in the framework of the boat.  They can be pulled out and pivoted into the down position or into the horizontal stowed position from the deck of the boat.  No need to get into the water!  If you are putting the boat in the water at a boat ramp with a dock, you may be able to put the boat in and step onto it from the dock, not getting wet at all, or you might need take one step in the water...maybe ankle deep, and board the boat from the shore/ramp.  Either way keeps you dryer than trying to get into and out of a kayak.

The BSB 360 Angler has a "front porch" ahead of the pedals, and a "back porch" behind the seat.  I bought a color-matching 35 Qt Orion Cooler along with the BSB 360 Angler.  I like to flyfish, and standing on the front porch gives me plenty of room to flycast without the fly line getting caught on any part of the boat.  I could put the cooler on that front porch and stand on it for an even higher elevated casting platform.  But I like to see the water right in front of the boat when I'm moving along, so I put the cooler on the back porch.  I think this helps balance the weight distribution better.

I got the BSB 360 Angler in mid-August, and between getting it registered and getting it set up the way I want it, weather and family plans, I've actually only been out on it once so far.  But its really nice.  The pedaling makes some noise.  Not super loud, but I will have to see if it scares fish or not.  I've heard that it gets quieter the more you use it.  So I'm looking forward to getting it "broken in".

Anyway...here's some pictures of my 360 Angler. 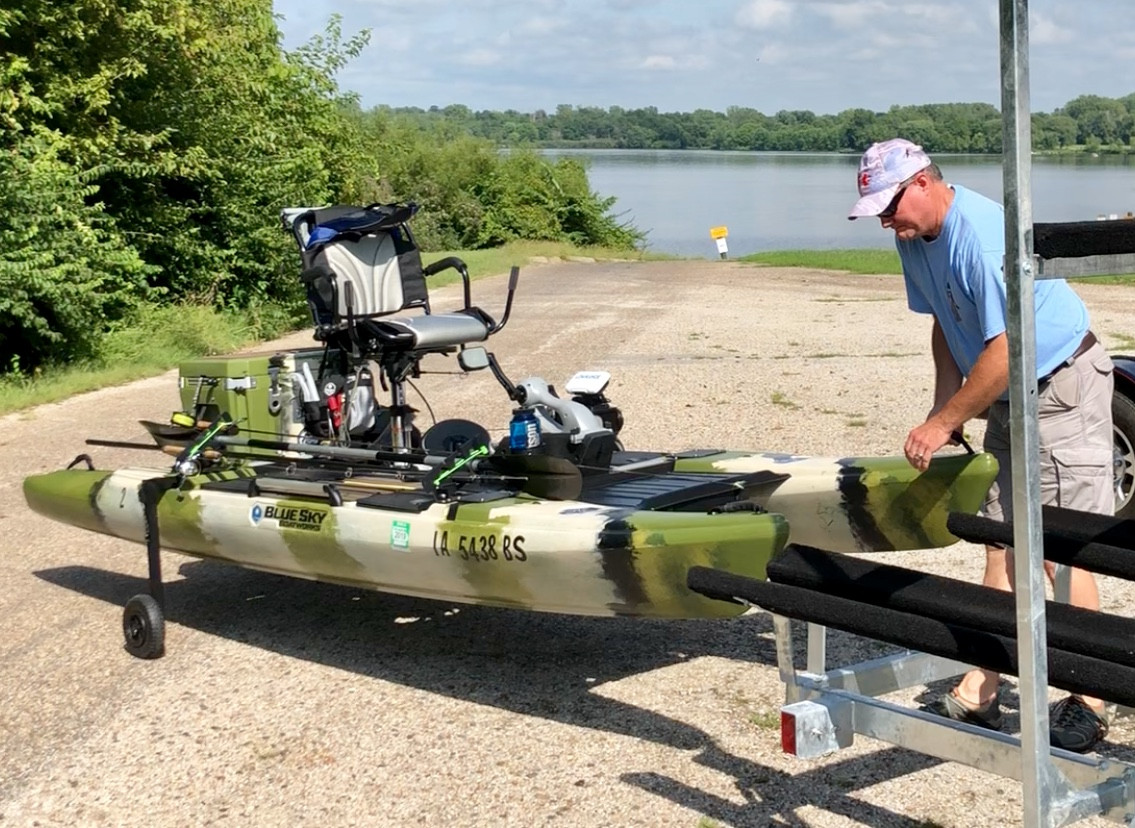 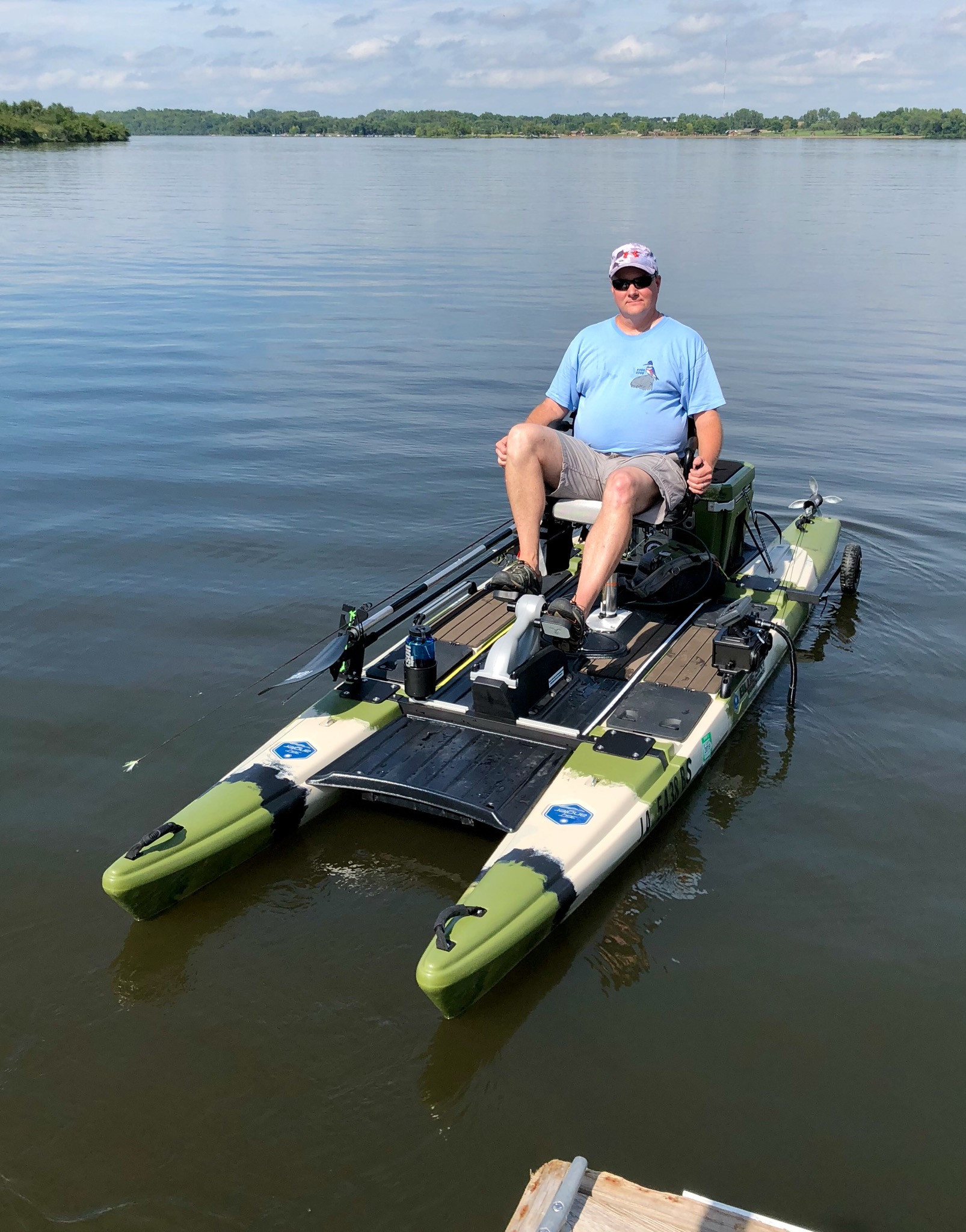 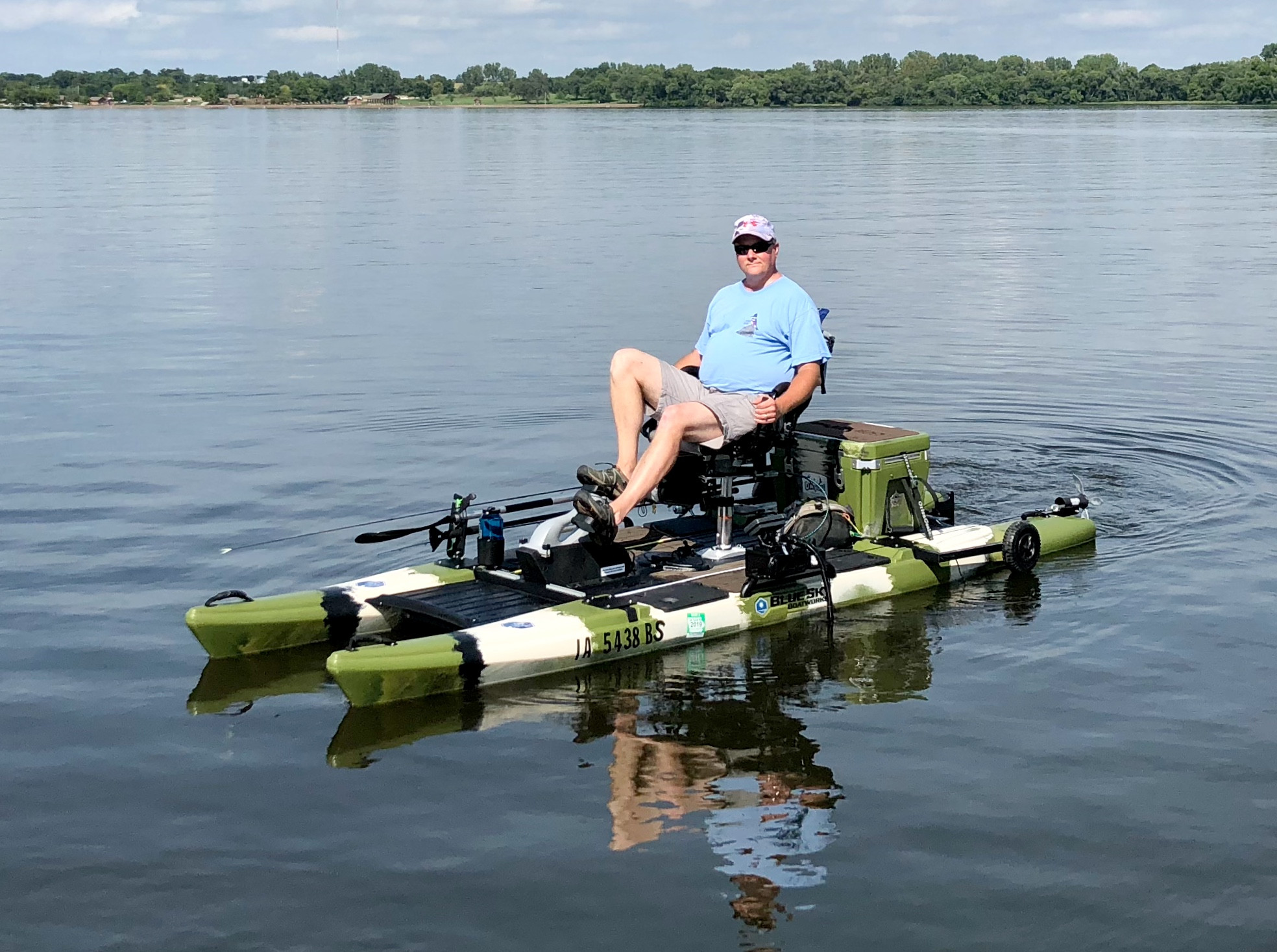 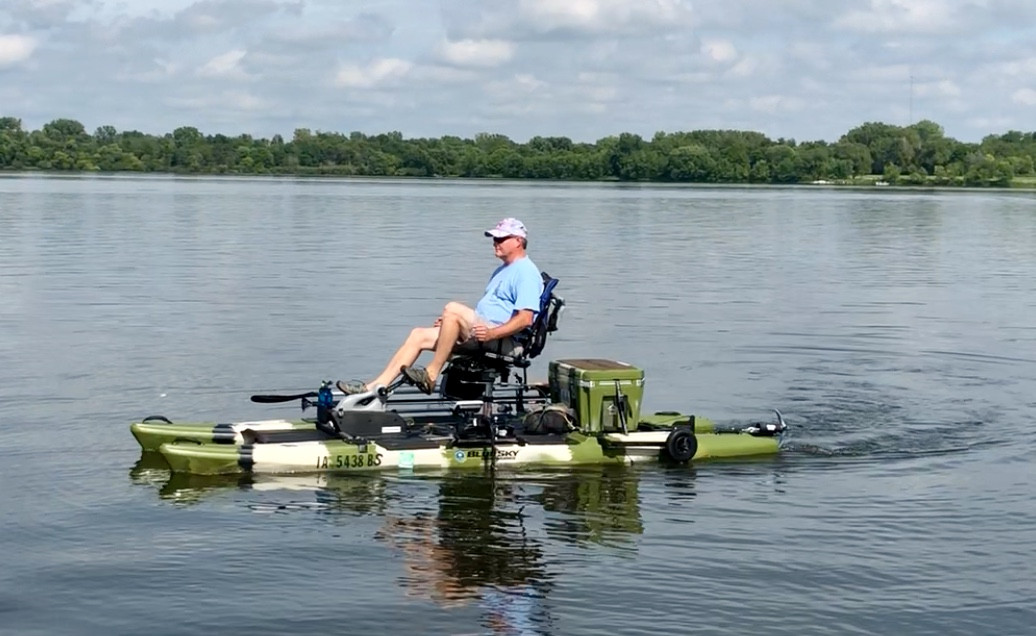 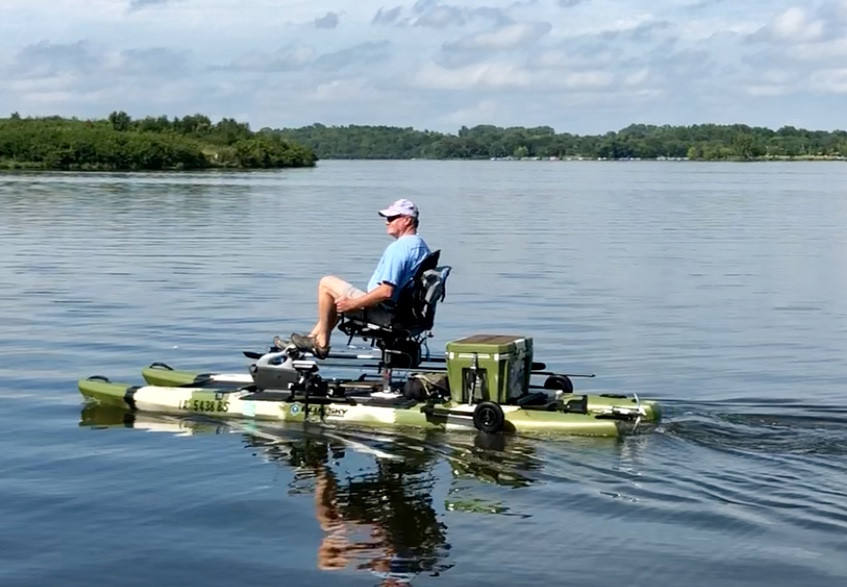 First Half of September 2018

Quickly got on the board early in September with some good bass.  I flyfished one pond for the first time ever...and caught some bass with the biggest two being very healthy 16" and 17" Bass on a Howitzer head bass popper fly pattern:

Once the ponds warmed up and the weeds and algae took over the shallows, Carp had been very hard to target with flies.  They weren't feeding close to shore, or at least not in areas/ways that I could spot them and present a fly to them.  We'd had a bunch of rain and the temps cooled off, and I managed to finally get another carp during my lunch hour.  This one measured 26".  It hit a John Montana's Hybrid Carp Fly variant. 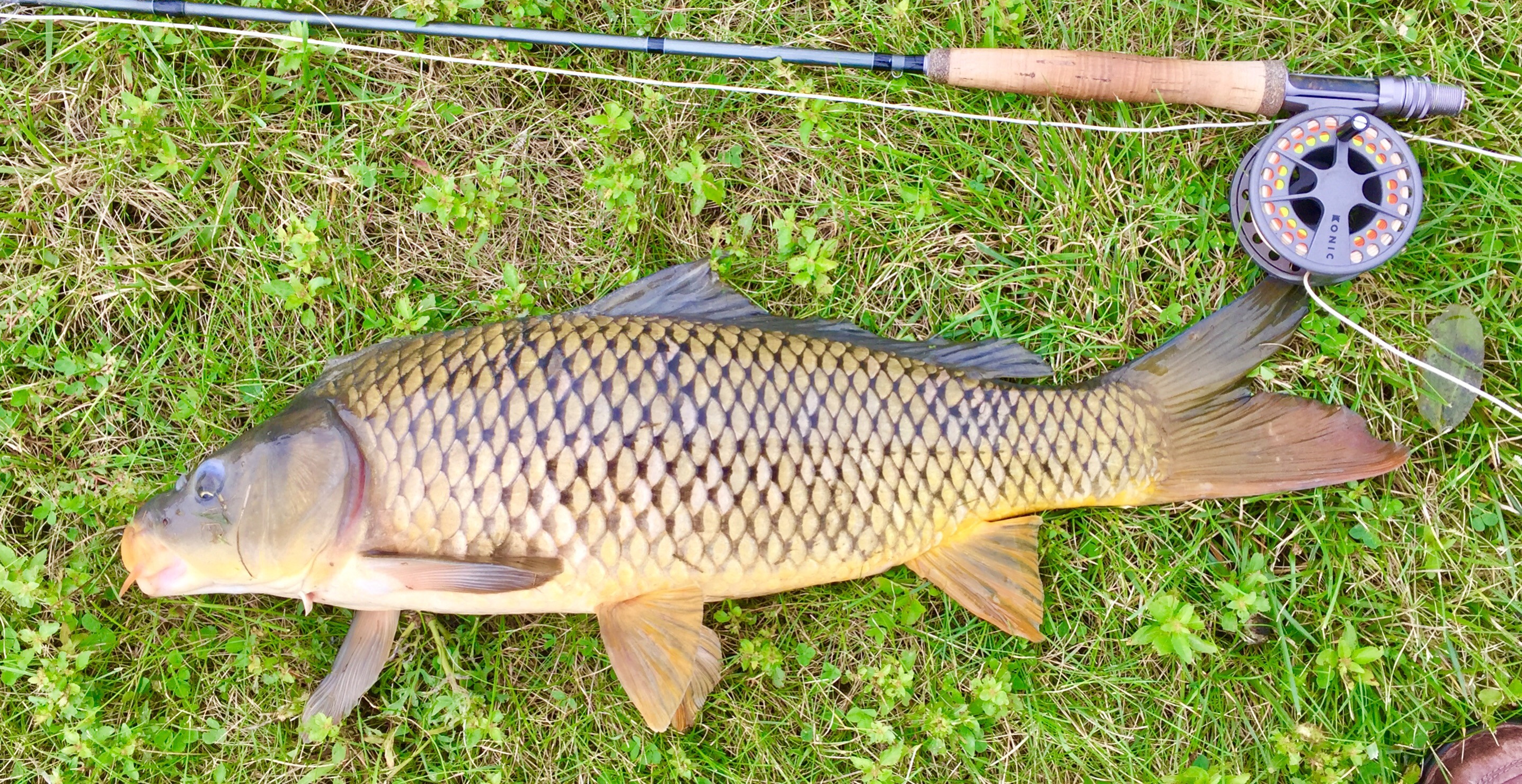 Other than that, fishing has been challenging.  I've been catching fewer fish...mostly smaller bass.  I had an exciting moment one evening when I hooked up with a small 11" bass, and something BIG (assumed it was a really big bass!) tried to catch & eat it while I was bringing it in to shore!

I've seen some decent catfish feeding in the shallows, but have not been able to get them to strike the flies I had on at the moment.

I did actually fish for panfish for awhile.  Caught some bluegills and even a couple crappies.  Also caught some Green Sunfish. 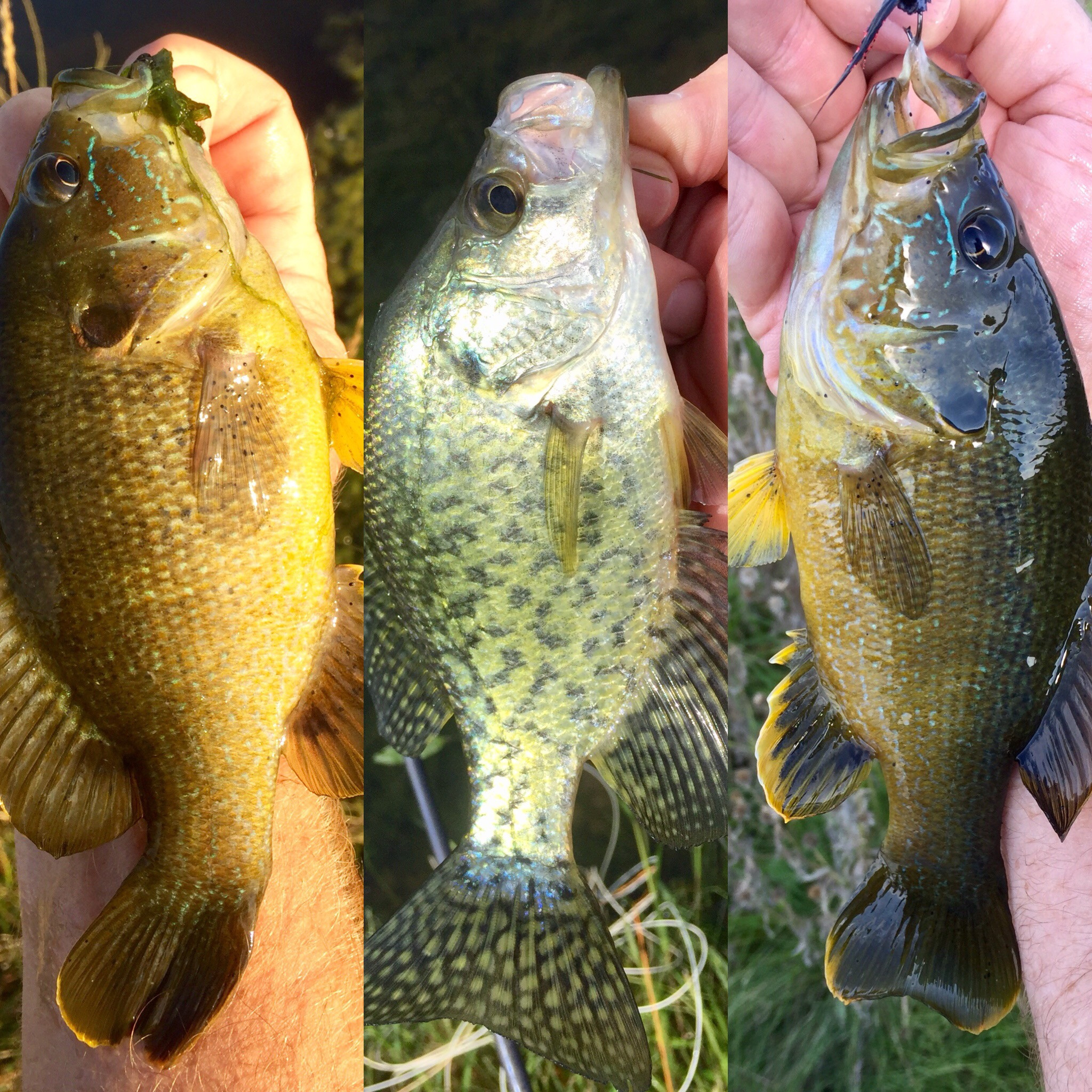 I hope fishing pics up soon!
In the meantime, I've been tying some flies: 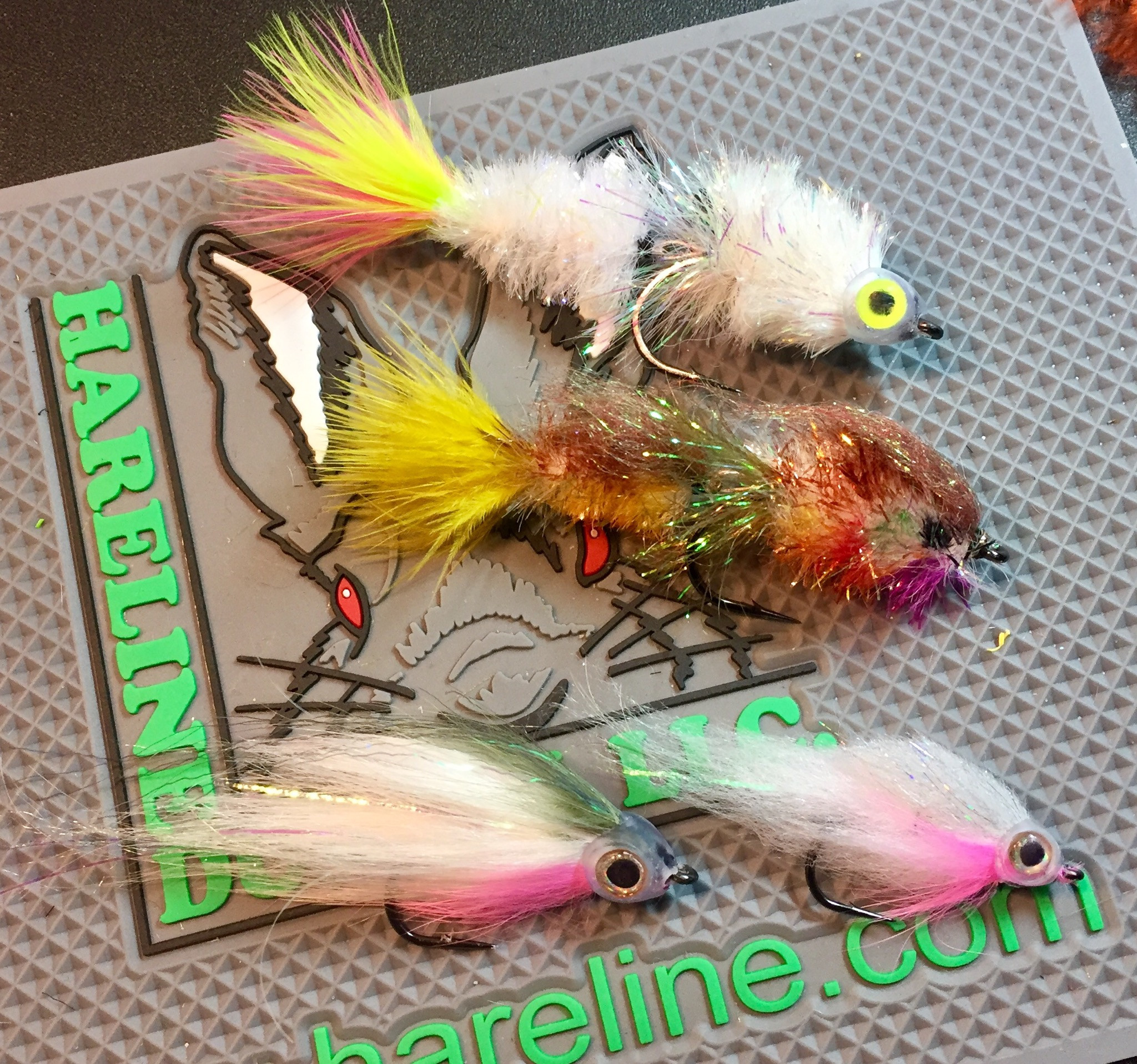 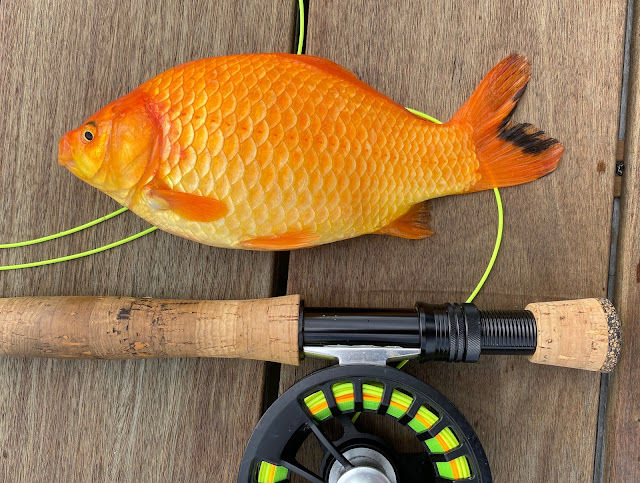