I was recently contacted regarding taking part with a focus group regarding the potential local impact of a pilot Urban Fishing Program. Some of the issues planned for discussion are opportunities presented to the community through community engagement, ecological stewardship, and youth programming.

Unfortunately, family schedules did not allow me to attend the focus group meeting.  I submitted these thoughts via email:

"I will be unable to attend this meeting.


I imagine you would value feedback and opinions all the same, so I will share mine with you:


Today’s youth are the future stewards and protectors of our natural resources. People won’t give effort to protecting what they do not appreciate. Fewer of today’s youth spend time enjoying the Great Outdoors (I’m referring to prairie, forests, streams and lakes,.. not outdoor athletic fields) than any generation in history. It isn’t the fault of the children or the parents, it is simply the result of the world migrating to high-population urban areas.


ANYTHING that can be done to get kids to enjoy and appreciate nature is a good thing, and will benefit the future of our natural areas.


I feel fishing is a major activity that can hold a child’s attention and interest, and can also teach them why conservation of plant, animal, land and water resources is so important. Everything is intertwined. Land practices affect water quality, water quality affects wildlife in and around it.


Unlike hunting, fishing allows direct contact with nature, without requiring that contact to result in death. Fishing while practicing catch & release ethics is important. Catching any size fish is fun, bigger fish are even more fun and challenging to catch. We can teach kids that releasing a fish caught today gives everyone the chance to catch that fish again later when it has grown even more.


An Urban Fishing Program is important, to teach that fishing does’t need to be a costly activity, or one that requires a lot of travel to far-off destinations. I live in Ankeny, and Ankeny has done a WONDERFUL job of requiring ponds to be part of many of the development projects within the city limits. There are currently over 20 public ponds in Ankeny!!! There isn’t such a concentration of places to fish in the rest of the Des Moines Metro area, but there certainly are some places. These would include Gray’s Lake, Easter Lake, Copper Creek Lake, DM River, Raccoon River, Blue Heron Lake in Raccoon Valley Park, a couple of public park ponds in Urbandale, various smaller retention ponds in newer developments, that may or may not be open to public fishing (if they aren’t…they should be!).


For residents of Ankeny, this means there is a place to fish within a reasonable bicycle ride for many kids, or a short car ride for adults. It is important to note that most of the ponds aren’t actively managed to produce better or more fish. In general, the ponds are stocked following construction, then left to their own devices. Ron White and I are currently working on a project, initiated by Ron, in conjunction with the City of Ankeny and Ben Dodd (Fisheries Manager with the Department of Natural Resources), to start managing some ponds better.


One thing that should be done with an Urban Fishing Program, is to stress the use of artificial lures. The use of live baits such as nightcrawlers or minnows often results in fish mortality because the hook isn’t set quickly, and the fish have time to swallow the hook deep into their throat or stomach. Actively casting and retrieving artificial lures usually results in a quicker hookset in the front of the mouth area. In many cases, de-barbing hooks can further reduce damage to caught fish. Few fish shake the hook free during the fight even with de-barbed hooks. Another benefit of de-barbed hooks in an Urban Fishing Program is that if a kids accidentally hooks someone else, themselves, or articles of clothing, a de-barbed hook will slide out easily, and generally require no first aid or clothing damage.


These are some of my intitial thoughts, perhaps you can share them at the group meeting?

I started out fishing with a yellow boa yarn leech, and it was working. But, I wanted to try one of those Jointed Minnows I had tied a couple months ago. It looked great in the water, and caught fish good too!

Here's a photo "montage" from today...not because the fish were impressive, just because I thought the pics turned out really well. 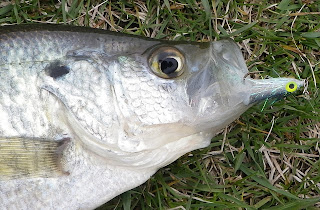 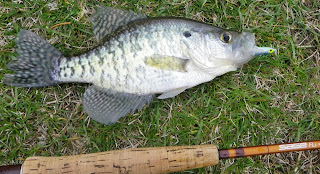 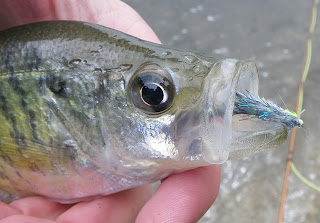 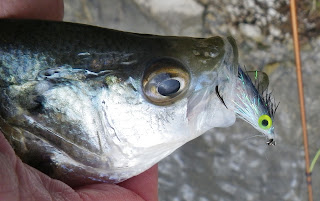 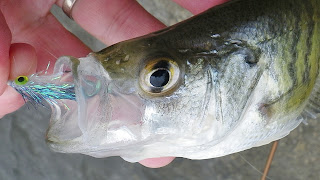 And, I took a picture of this Green Sunfish, because his colors were so dark when I pulled him out of the water...he was almost black! But his color started to lighten up by the time I got the camera ready, so you'll just have to imagine it 4 shades darker. 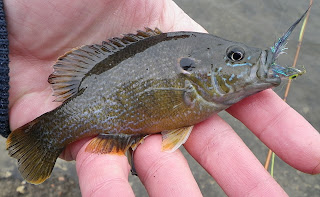 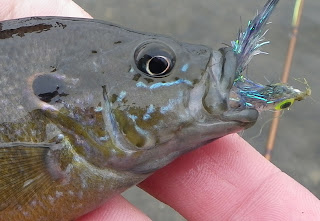 The wind was finally blowing out of the right direction for me to try some topwater poppers for bass. No takers along the short stretch of shoreline I fished. A guy with spinning gear on the opposite side of the pond did catch a small bass (<12").

I saw a nice Grass Carp porpoise within casting distance, so I chucked the popper in front of it, but no luck.

I'd seen some surface activity that I figured was bluegills, so I switched to a microjig. The first one (mostly black) got some attention, but no hookups. I switched to one with an olive grizzly marabou tail and an olive sparkle dubbing for the body. I caught all the fish on this.


The biggest bluegill was a chunky 8.5" female, which is the biggest I've caught on the fly rod so far this year. 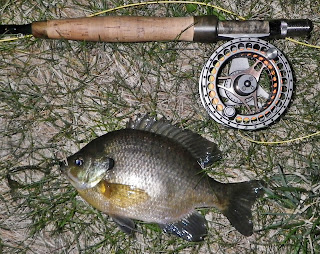 The fish that got me all excited (and still couldn't fall asleep 2 hours later) was the crappie. It was a BEAST! Its my "Personal Best" on the fly rod, although I've caught bigger on spinning gear. It is a white crappie, and measured 14". It fought really hard, taking line a couple times. I was sure it was a bass, until it finally got closer to shore! I released all the fish, as usual. 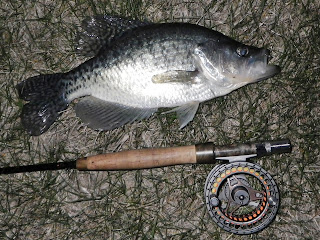 Last year I took some Lightning pictures with a Nikon Coolpix S640 pocket camera.  They turned out....pretty good.  I posted them in a blog entry here:
http://fishndave.blogspot.com/2010/08/lighting-show-july-23-2010.html

Actually, I should say I took some VIDEO with said camera, and then saved individual frames out using MicroSoft Movie Maker.  There's probably other software to do this, and my camera can probably do it as well.

So, anyway, last night we had a good lightning show in the skies again, so I grabbed my newer camera, a Pentax Optio W90, and took 2 video segments with it, and went through the same process of grabbing still images from the video.  Below are some of the pictures. 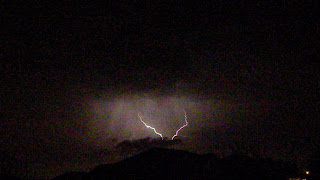 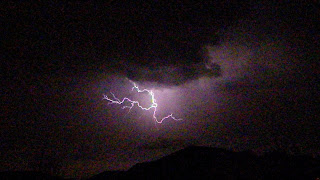 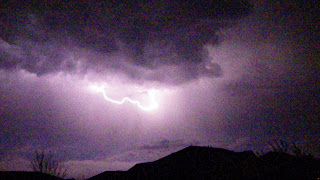 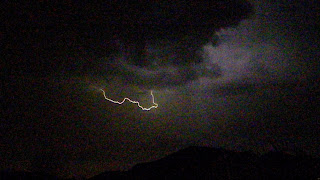 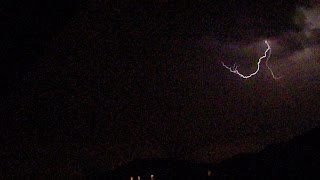 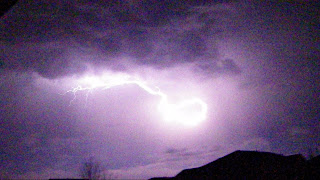 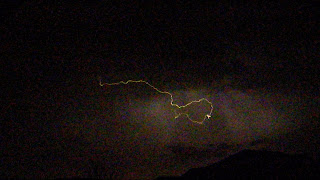 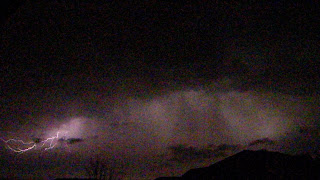 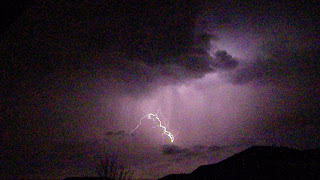 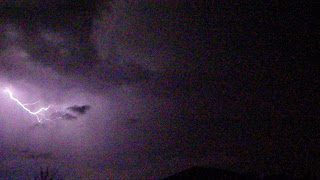 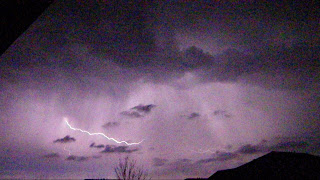 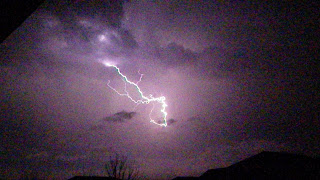 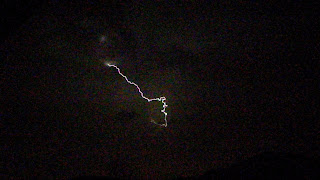 Overall, I've gotta say the Nikon did better....the Pentax seems to have a lot of extra noise in the low-light conditions.  Still, its better than nothing.  I don't foresee an expensive DSLR camera in my near future, that might take some excellent shots by leaving the shutter open for extended durations during a lightning storm.
at April 04, 2011 No comments: