I went to Lake Petocka to fly-fish for trout.  I fished from about 3pm to 6pm.  It was a nice day, not too windy, mostly sunny, warm (low 70's).  The trout have been in the lake for over a week now, and should be acclimated, and hopefully HUNGRY.

I started fishing the area where I had caught fish on the past 2 trips to the lake.  I wanted to fish a different spot, but there were a number of people lining that shoreline, and I don't enjoy fishing in crowds.  They weren't catching anything anyway.

It was just dead.  No fish activity at all.  But I didn't want to leave, so I drove around to the opposite side of the lake and tried fishing there.  The FISH were there!!  It wasn't fast fishing, but seeing the signs of fish in the area was a definite confidence booster.  I ended up catching 8 Rainbow Trout and 3 Bluegills. 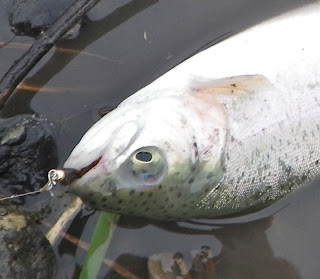 I saw a dozen or so Brook Trout.  I even got one or two of them to strike at my nymph pattern, but I wasn't able to hook any of them.

Here's the beadhead softhackle nymph pattern that caught all the fish for me: 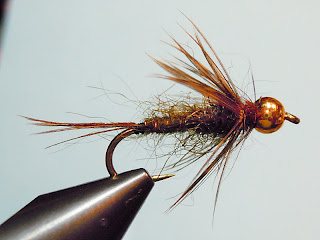 I was using a strike indicator, and several fish hit the indicator...one even took it down for about 8 seconds before I popped it out of the fish's mouth and back to the surface!  So, I tied on an Elk Hair Caddis dry fly.  I had several good hits on it, but wasn't able to hook the fish, and eventually the fly got waterlogged and wouldn't float anymore.  I then switched to a foam Hopper pattern.  I had one Rainbow going NUTS over it...repeatedly rising, boiling, diving, and then charging back up...But I never did hook that fish.

The biggest bluegill I caught was a really NICE fish of 9.25"! 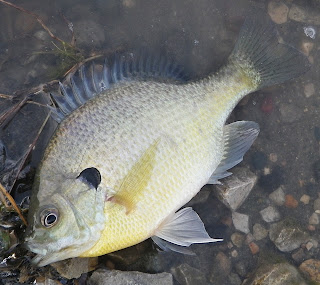 ---------
A fellow came down and fished near me.  We talked some.  He had just gotten back from 18 months tour-of-duty in the military in Afghanistan.  He was extremely appreciative of the peacefulness of being at the lake...the quiet, the Canadian Geese that took flight off the water, and TENNIS SHOES!  He said the first thing he did when he got off the plane was go to a McDonalds!  I gave him a trout, he caught a trout, and another angler gave him 2 trout.  He was SO looking forward to having a nice FRESH MEAL...his first in 18 months!  He said we was probably going to relax for about 3 months, then go back to Afghanistan for more active duty.  He said his favorite thing over there was escorting the children to school.  He grew sort of attached to an 8 year-old girl.  When he first met her, she could speak her own language, of course, but couldn't read it or write it.  When he left, she had mastered reading and writing here language, as well as English, and she was also doing very well with French and ...one other language.  He said the kids there, especially the girls, are like sponges, they just soak up everything they are taught.  He said she cried when she found out he had to leave.
at October 24, 2011