Went back to Prairie Ridge South pond last night to fly-fish.  We had a pretty good SSE wind all day, but it seemed to be more ESE while I was fishing.

I used a black microjig with some turns of dry fly hackle just behind the head. I had figured the wind might require me to use a strike indicator, but I never did put one on the line.  My first 5 casts resulted in 4 Bluegills landed.  Then that spot sort of cooled off, so I moved down the shoreline one way and would stop and make casts along the way. I picked up some more Bluegills.  The fish seemed to be suspended a couple feet down, about 10-15' out from the near-shore drop-off.  Most strikes were really aggressive, and the fights were excellent.

I was fishing shorelines that get fished a lot, and I noticed the average size bluegill I was catching last night was a bit smaller than bluegills I caught during the previous trip to this pond.  But all the fish were healthy fish. 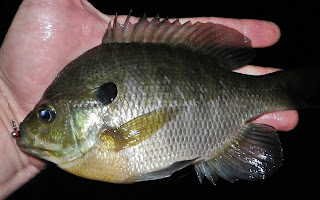 I eventually moved back the other direction around the pond, still fishing periodically along the way.  I ended up catching at least 15 Bluegills in about 75 minutes.
at October 07, 2011